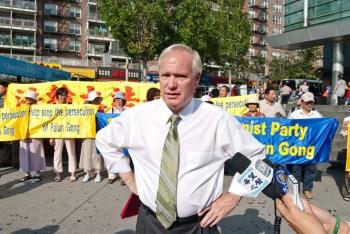 Councilman and mayoral candidate Tony Avella during a press conference in Flushing, Queens. After receiving an invitation to China, Avella announced he will not go until the Chinese regime improves its human rights. (Joshua Philipp/The Epoch Times)
US

Joshua Philipp
Joshua Philipp is an award-winning investigative reporter with The Epoch Times and host of EpochTV's "Crossroads" program. He is a recognized expert on unrestricted warfare, asymmetrical hybrid warfare, subversion, and historical perspectives on today’s issues. His 10-plus years of research and investigations on the Chinese Communist Party, subversion, and related topics give him unique insight into the global threat and political landscape.
View profile
Follow
biggersmaller
Print
NEW YORK—Councilman Tony Avella may not be leading in mayoral race polls, but he is at the forefront of international justice and human rights.

Avella, who is lagging behind Mayor Michael Bloomberg and City Comptroller Bill Thompson in the 2009 mayoral race, declined an invitation to China on Thursday, saying he will not go until the Chinese Communist Party (CCP) ends its human rights abuses.

The invitation was extended from the Asian American Business Development Center in Manhattan, and was for a trip to China from Oct. 9-18. Avella gave the announcement during a press conference in front of the Queens Library in Flushing, New York on Thursday evening.

"I'm not going to go and I would never go until such a time when the Chinese government responds to the human rights abuses, not only in China, but their persecution of Falun Gong practitioners here in the United States,” said Avella, referencing the numerous attacks against Falun Gong practitioners in Flushing, many of which have been linked back to the Chinese Consulate of New York.

Avella continued, “Clearly we elected officials of the United States, should send a clear message to them that we don't think human rights abuses and throwing people in jail for their beliefs is appropriate.”

The invitation was given on grounds of helping the economic partnership between New York and China. Similar invitations have been extended to U.S. public officials in the past.

“China prefers to obtain its information a little bit at a time, by having its scientists and experts exploit individuals who are visiting China in the normal course of business,” said former FBI chief analyst for Chinese counterintelligence, Dr. Paul Moore in a New York Times op-ed piece published in September 1999.

Between March 29 and April 1 in 2007, New York City Councilman and City Comptroller candidate John Liu accepted such an invitation.

During the trip, Liu met with Xu Yousheng, who is the vice director of one of the CCP’s offices dedicated to spying on and infiltrating foreign countries and politics—the Overseas Chinese Affairs Office of the State Council.

Yousheng’s office is the medium between the CCP’s Department of United Front Work and the regime’s foreign consulates and embassies. After his trip, Liu refused to support Falun Gong practitioners—who are being targeted for persecution by the CCP.

When Falun Gong practitioners were being attacked in his district in May, 2008, Liu not only refused to condemn the attacks, but held a private meeting with the attackers.

Avella has taken a much different stance on the issue. "I think the evidence is clear and what is going on in downtown Flushing is clear. It is unacceptable, here and in China itself. I for one am not going to be fooled by this,” he said.

Avella added, "If more of my colleagues and elected officials in this country would do similar actions to what I'm doing today, it would send the message to the Chinese government that they have to change. They can no longer act in such a fashion."