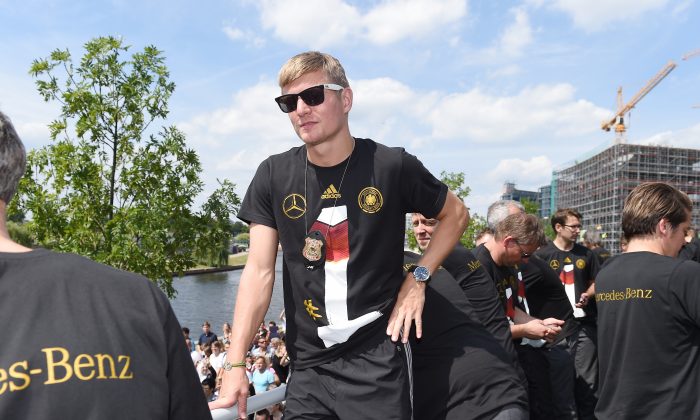 Toni Kroos’ move to Real Madrid is a done deal.

Madrid said the 24-year-old Kroos, a key member of Germany’s World Cup-winning team, would be presented at the Santiago Bernabeu stadium later Thursday.

The 24-year-old German international had earlier refused to sign a contract extension with Bayern Munich that will see him at the Alliance Arena beyond 2015, and will instead move to Spain.

Neither Champions League winner Madrid nor Bundesliga champion Bayern disclosed the transfer fee. However, the transfer fee is believed to be about 30 million euros ($40.6 million), according to Sport1.

Kroos was chosen as the best player at the 2007 Under-17 World Cup, when Germany finished third.

He joined Bayern when he was 16 and later spent 18 months on loan at Bayer Leverkusen before returning to the Bavarian giants.

“Garcon” — the Brazilian nickname for Kroos — became a regular starter since Pep Guardiola took over as coach last season, and has helped Bayern win the Champions League in 2013 and domestic doubles the past two seasons.

Although Kroos was instrumental in Germany’s 2014 World Cup victory, having scored two goals, provided four assists, and finishing the tournament with the best Castrol Index of 9.79, he only played a bit-part role in the 2010 World Cup.

Bayern chairman Karl-Heinz Rummenigge thanked Kroos for his time in Munich and wished him “all the best in Madrid and at Real.”