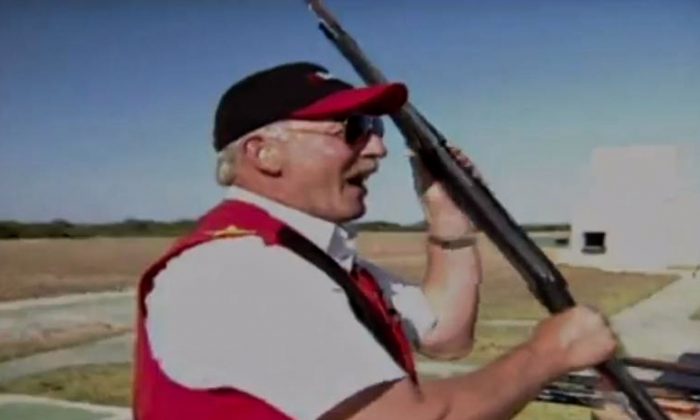 Shooter Tom Knapp is shown in a tribute video on his website breaking a world record in Murfreesboro, Tenn., on Oct. 20th, 2004. (Screenshot via The Epoch Times)
Entertainment

Tom Knapp dies: The trick shooter champion from Minnesota died at the age of 62 on Friday, April 26.

Tom Knapp was hospitalized with pulmonary fibrosis before he died on April 26, reports Pioneer Press, a local Minnesota publication.

The Elk River, Minn., shooter broke a world record for the third time in 2004 when he tossed 10 clay plates into the air and shot them all within 2.2 seconds.

A tribute video for Knapp posted on his official website shows Knapp explaining his calling: “I’ve had a childhood dream of following these exhibition shooters, and as it progressed into the ’50s, of course Herb Parsons was a big inspiration for me.”

He was 9 years old when Parsons’ shooting captivated him. Knapp also recalls an anecdote that he jokingly said motivated him to shoot birds.

As a child, he was sitting on the steps of his home, petting his cat, when a dove came down and pecked the cat. The cat got scared and scratched his brother. His brother jerked back and accidentally hit him. He started screaming, which startled the family’s pet squirrel. The squirrel ran over his mother’s freshly baked pies. His mother swat at squirrel and missed, hitting one of the pies so hard the meringue flew up and landed on his father’s face. His father’s anger was then directed back at Knapp.

He joked that he held a grudge against doves ever after.

A message on his website reads: “Tom Knapp was a great man, husband, father, grandfather, friend, brother, shooter and showman. He amazed thousands with his sharp aim, friendly smile and lovable nature. No words can express what a loss this truly is to the world but Tom will definitely be missed by all the people whose lives he touched. Our thoughts and prayers go out to his family and friends and hope we can all celebrate the life of Tom Knapp and what he has taught us about passion, dedication and happiness.”