Tom Cotton: US Should Deny Visas to Chinese Science and Tech Students 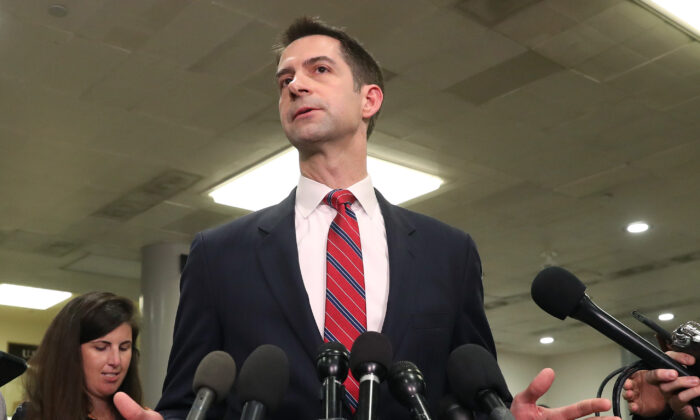 Sen. Tom Cotton (R-Ark.) speaks to the media after attending a briefing with administration officials about the situation with Iran, at the U.S. Capitol in Washington on Jan. 8, 2020. (Mark Wilson/Getty Images)
By Bill Pan

Senator Tom Cotton (R-Ark.) suggested on Sunday that the U.S. government should deny visas to Chinese students who want to earn their science degrees from American colleges and universities.

“It’s a scandal to me that we have trained so many of the Chinese Communist Party’s brightest minds to go back to China, to compete for our jobs, to take our business, and ultimately to steal our property and design weapons and other devices that can be used against the American people,” Cotton said in an interview with Fox News’ Maria Bartiromo on “Sunday Morning Futures.” “I think we need to take a very hard look at the visas that we give to Chinese nationals to come to the United States to study, especially at the postgraduate level in advanced scientific and technological fields.”

Cotton added that student visas for Chinese nationals should be limited to those who seeking to study courses in the Humanities.

“If Chinese students want to come here and study Shakespeare and the Federalist Papers, that’s what they need to learn from America,” he said. “They don’t need to learn quantum computing and artificial intelligence from America.”

As the number of students from China studying in the United States has steadily grown, American colleges and universities have developed a reliance on Chinese student enrollments to balance their budgets, fueled by an increase in international undergraduates who are willing to pay full tuition. However, there are ongoing concerns about certain Chinese students and academics acting as “non-traditional collectors” of information to advance Beijing’s interests at the expense of America.

Under China’s National Intelligence Law, which came into effect in July 2017, individuals and businesses are obliged to cooperate with the communist regime’s domestic and oversea intelligence work. The law grants intelligence agencies authority to demand organizations or citizens provide “needed support, assistance, and cooperation.”

Earlier this January, A federal judge charged a Chinese national with attempting to smuggle biological material for cancer research from a Harvard University medical lab at the behest of the Chinese regime. Zaosong Zheng, who held a Harvard-sponsored visa to study in the United States, has been detained since he was caught at Boston Logan International Airport with 21 stolen vials of specimens.