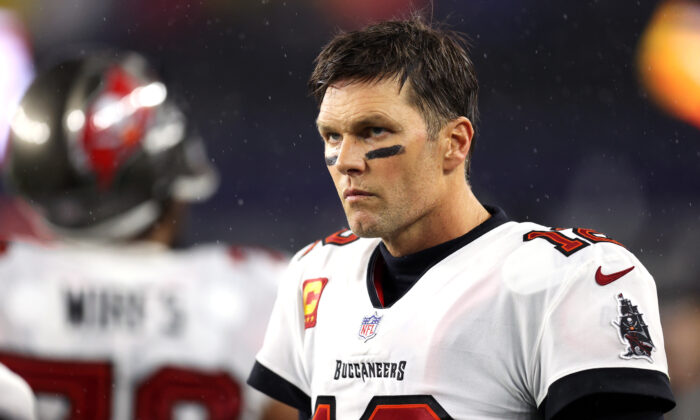 Tom Brady #12 of the Tampa Bay Buccaneers looks on from the bench during the game against the New England Patriots at Gillette Stadium in Foxborough, Mass., on Oct. 3, 2021. (Maddie Meyer/Getty Images)
NFL

Tom Brady Victorious Over the Patriots in Homecoming Game

Sunday night marked the return of Tom Brady to Foxboro, Massachusetts. It resulted in a win in a closely contested struggle, 19–17, between his Tampa Bay Buccaneers and his former New England Patriots. In the process, he broke the all-time passing yardage record, totaling 80,560 yards, formerly held by Drew Brees. Brady also holds the record for the number of touchdown passes at 591. He also became the fourth quarterback who was able to beat all 32 teams in the NFL.

In appreciation of Brady’s championships and accomplishments for the Patriots, a tribute video was played before the game. Brady did not see the video as the teams were still in the locker room. There were also chants of “Brady” by his old fans. Being there for two decades, he stated, “I feel like I’ll always be a part of this community … It’s been an amazing place for me. It still is.” However, Brady had made it evident that he came to play the game and not get caught up in the drama of the homecoming.

The enormous build-up to the game was the conflict between Brady and his former coach Bill Belichick, and how Brady felt forced to leave the organization. The heavy rain also played a part in the low-scoring affair. However, Brady was unable to throw a touchdown the entire game. Belichick, a defensive genius, was able to put together a great defensive strategy to keep Brady in check. “Look, we went against Tom Brady every day, every day in practice defensively,” Belichick stated.

Their dynasty break-up two years ago was ultimately due to Brady’s decision to use free agency to find a team that could give him another opportunity to win the Super Bowl. And he indeed succeeded with the Buccaneers. Brady also recruited Rob Gronkowski, a freshly retired Patriot, to play a big contribution in winning the Super Bowl. Belichick did not show much confidence in keeping the aging superstar that had done so much for the club. Looking for Brady’s replacement seemed logical, as he had surpassed 40 years old.

Brady’s current replacement for the Patriots, Mac Jones, indeed outplayed Brady statistically. Jones completed 31 of 40 passes totaling 275 yards; including 2 touchdowns, and one interception. While Brady finished with 22 of 43 completions, for 269 yards; and no touchdowns or picks.

The scoreline was close throughout the entire game. At half-time, New England edged Tampa with a 1 point 7–6 lead. Tampa retook a 13–7 lead with 3:29 remaining in the third quarter; with a run of 8 yards by Ronald Jones. Leonard Fournette led the Buccaneers rushing with 91 yards on 20 carries. New England regained the lead 14–13, with a 7 play 77-yard drive with 3:32 in the third quarter. The drive culminated with a 1-yard pass completion from Jones to Jonnu Smith.

Many Tampa Bay drives would stall before the end zone. Brady was missing his favorite tight end, Rob Gronkowski. He and a few others were out with injury. With 6:59 to play, Tampa settled for another field goal to regain the lead 16–14. Both teams would counter with more field goals to 19–17, in favor of Tampa. This set up a final drive for New England; and would end with a 56-yard field goal attempt in the rain, by Patriot’s Nick Folk with :59 remaining. Folk has had a solid career, and his season statistics have been impressive. He is tied for 8th in the league with a field goal percentage of 90.9 percent. This 56-yard attempt would tie his career-long. The kick was from the right hash-mark and carried enough distance towards the left goal post. However, it struck that post and fell to the outside.

In the post-game interview with NBC, Brady stated, “It’s pretty cool,” to break the record at Gillette Stadium. “Nothing in this sport can be accomplished without incredible teammates and coaches. I’ve just been blessed for 22 years to be with some amazing people. A quarterback can’t do anything if the guys don’t catch the ball. Guys did a great job catching for me the last 22 years. All of them, which I hope were … felt a little piece of happiness tonight watching that. Cause everybody contributed … I can throw it a little bit and I’m glad I got so many great guys who catch it.” Brady admitted, “It had been an emotional week.” However, he was able to keep the emotions bottled. But after the game, many former teammates, coaches, and staff showered him with hugs and well-wishes.

Brady’s success has led many to consider him to be the “GOAT” (greatest of all time). His career for over two decades stems from much hard work and preparation. He’s a family man; married to a supermodel, and shares 2 children. He’s a 7-time Super Bowl champion and a 5-time Super Bowl MVP.