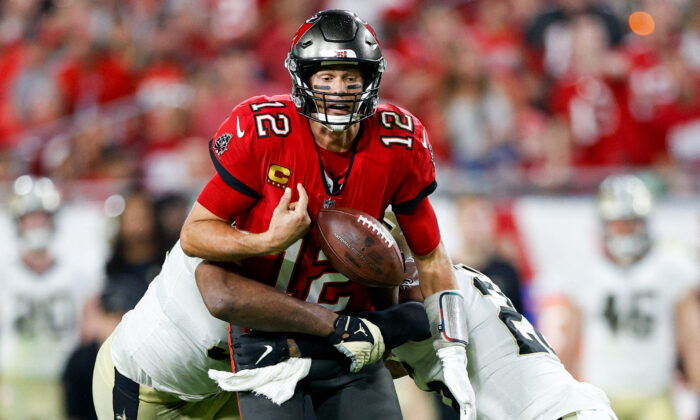 Tampa Bay Buccaneers quarterback Tom Brady was named to the Pro Bowl for the 15th time, another record in his historic career.

Per the NFL, Brady’s selection Monday broke a tie with Peyton Manning, Tony Gonzalez, Bruce Matthews, and Merlin Olsen for the most all-star selections in league history.

The five players were pictured on billboards in Las Vegas, which is set to host the Pro Bowl on Feb. 6. The full AFC and NFC Pro Bowl teams are scheduled to be announced Wednesday.

They weren’t the only players to be revealed Monday. On ESPN’s “Monday Night Countdown,” former Minnesota Vikings star receiver Randy Moss surprised current Vikings wideout Justin Jefferson with the news that he was selected to the Pro Bowl. It is the second straight selection to start Jefferson’s career.

The Chicago Bears also announced that linebacker Robert Quinn and return specialist Jakeem Grant Sr. were voted to the Pro Bowl. It is Quinn’s third Pro Bowl selection, but his first since 2014, when he played for the Rams.

Taylor received the most fan votes (265,370), according to the league. The fan vote counts for a third of the total vote. He was followed by San Francisco 49ers defensive end Nick Bosa, Kelce, 49ers fullback Kyle Juszczyk, and Dallas Cowboys rookie cornerback Trevon Diggs.