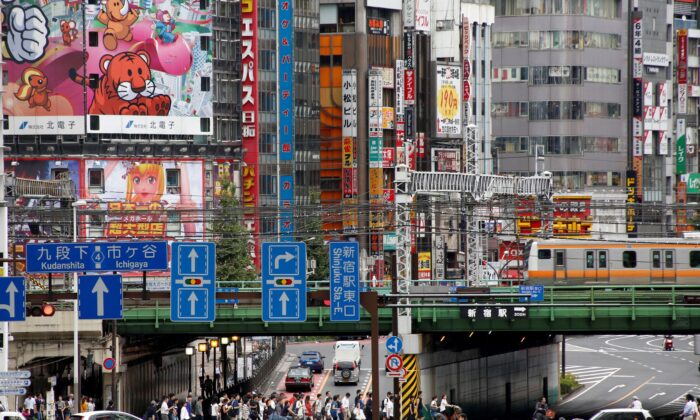 People cross the street at a shopping district in Tokyo, Japan, on Sept. 8, 2016. (Kim Kyung-Hoon/Reuters)
Economy

TOKYO—Consumer inflation in Tokyo will likely post slightly slower year-on-year growth in January, a Reuters poll showed, after the suspension of a government discount travel campaign in late 2020 led to a less favorable situation for price rises.

Still, core consumer prices in the capital city—widely considered a leading indicator of nationwide price trends—likely stayed in positive territory for a fifth consecutive month, even when stripping out the boost they got from 2020’s low comparison base brought about by discount travel offers.

That would mark the slowest growth in the core CPI of Japan’s capital since a 0.3 percent gain in November.

“While energy and food prices likely accelerated further as rising import costs are passed on, the gains will be offset by special downside factors,” economists at SMBC Nikko Securities wrote in a note.

A government campaign to give consumers discounts on overnight stays, which was suspended in December 2020 after a jump in COVID-19 cases, likely led to less downward pressure on prices early last year, slowing year-on-year price growth.

The Bank of Japan (BOJ) this week upgraded its inflation forecasts for the fiscal year starting from April largely due to a surge in global commodity prices, which is prodding more firms to pass on higher costs to consumers.

Minutes of the BOJ’s December policy meeting released on Friday showed that some of the central bank’s board members said Japanese firms might be starting to be more aggressive in doing that.