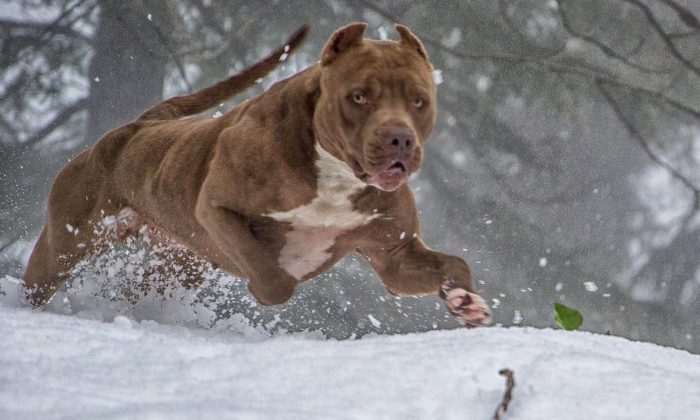 A 2-year-old Kentucky girl and her dog went missing for about 36 hours before she was discovered safe and sound.

The family of Charlee Campbell believes that Penny, their pit bull, looked after the girl.

“God is listening to us. He is listening,” grandmother Beth Campbell recalled thinking, according to the Courier-Journal.

Beth said that she was praying for the safe return of her granddaughter.

“By the grace of God and everyone that helped, she’s (safe), and that’s all that matters,” Campbell said. “I can’t even explain how happy that I am that this baby is home because I love her more than anything in this world.”

After the pit bull was spotted, Charlee was seen walking out of the woods, WAVE3 reported. They said she came down a hill from across the house where she had gone missing.

Wayne Brown, a neighbor, said she appeared at his home after the dayslong ordeal.

Brown said that he was “sitting on his sofa, praying for Charlee’s return” when he saw the girl in his own backyard.

“My little brother went missing,” Brown revealed to Wave3 News. “He’d wandered away from the home and he had climbed three fences. They found him miles away from the house.”

He believes a higher power was involved.

“I”m convinced that God led her to our porch,” Brown told the Courier-Journal. “I don’t know why me. It could’ve been anyone. But no one will convince me otherwise — I believe with all my heart that it was the Lord, Jesus Christ, who brought her up on that porch and let her be found by us.”

Brown added that there is “so much evil and so much wicked in this word, and people doing ungodly things to these kids. To find one safe and unharmed? I can’t express it.”

He added: “There are no words, except God.”

“I can’t believe she survived it,” Bullitt County Sheriff Donnie Tinnell said. “There’s coyotes in them hills. There’s copperheads and rattlesnakes and ticks — all the elements. And somehow she came out in pretty good shape.”

Dog stays by missing toddler’s side for two days after she went missing…https://t.co/JQbwZFIPKK pic.twitter.com/P5yMAdZoKd

“That big dog (Penny), because he’s huge, and that child looks like it would be hard to miss,” he said. “But it might be a circumstance where she got tired and laid down and went to sleep for hours on end — behind a stump or behind a tree or who knows what, a big rock — it’s possible to overlook, I guess, if the dog laid down with her.

“I’m not for sure going to say what I think happened. I don’t know,” Tinnell continued. “But we can get some answers with some continued investigation and that’s what we’re going to do.”