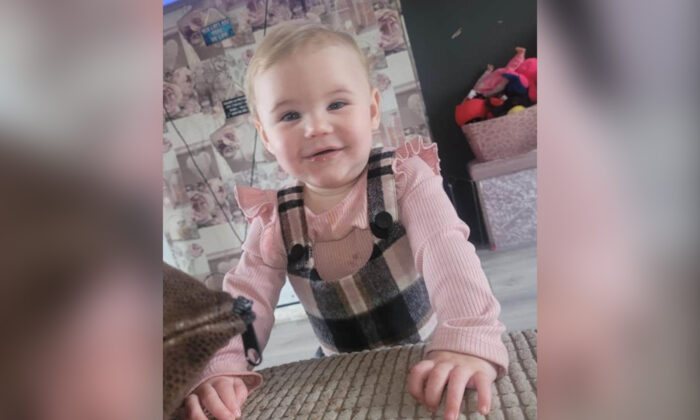 Undated file photo of Bella-Rae Birch, a 17-month-old girl killed in a dog attack at her home in Merseyside, England, on March 21, 2022. (Family Handout via Merseyside Police)
UK

A 17-month-old girl died in Merseyside, northwest England, on Monday after she was attacked by her family’s new pet dog.

The attack, at an address on Bidston Avenue in Blackbrook, St. Helens, was reported to Merseyside Police at around 3:50 p.m. on Monday.

The child, later identified by the police as Bella-Rae Birch, was taken to hospital after emergency services attended the scene, but she died in hospital as a result of her injuries.

The dog, which the family had owned for a week, was handed over to police at the family address and “has been humanely destroyed.”

Merseyside Police said they will carry out further forensic examinations to determine the breed of dog and whether it is a legal breed under the Dangerous Dogs Act (1991).

Officers also carried out “extensive CCTV, witness, and house-to-house enquiries” at the scene on Monday evening.

Detective Inspector Lisa Milligan said the force is supporting the “absolutely devastated” family and is “working to identify the previous owners of the dog concerned and establish its history.”

“Our officers will remain on Bidston Avenue this evening and in the coming days to provide reassurance to the local community and we will work tirelessly to establish the full circumstances,” Milligan said in a statement on Monday night.

The detective inspector appealed to potential eyewitnesses and local residents, asking them to come forward with any information about the dog in question.

“Our officers take the issue of dangerous dogs very seriously. Over the past years, we have worked proactively with the five local authorities in Merseyside to ensure prohibited dogs are taken off the streets,” she added.

In a statement issued on Tuesday through Merseyside Police, Birch’s family thanked the community for their support.

“We would ask that we are now allowed some space and time to try and come to terms with the tragic loss of our much-loved Bella-Rae,” the statement reads.

“She will be sadly missed but never forgotten.”

Neighbours spoke of their shock after the fatal incident.

“She was such a beautiful little girl, toddling about,” 53-year-old Joanne Matthews told the PA news agency.

“I’d see the family in passing, just to say hello, and they were always very pleasant.”

Matthews said she saw an ambulance outside the house in Bidston Avenue at about 3:50 p.m. on Monday and then about 10 police vehicles arrive.

“I saw them bring the dog out. I couldn’t tell what breed it was but from the back, it looked like a Staffordshire bull terrier or pit bull,” she said.

Another neighbour who did not want to be named told PA she saw the mother “on the field at the front of the house crying” when she arrived home.

“She was hysterical,” the neighbour said, adding that the area is “usually very quiet” and “safe for children.”

“Thoughts & condolences are with her family & loved ones,” she wrote.

Local councillor Jeanie Bell also appealed to witnesses to step forward after hearing the “absolutely awful news,” adding she couldn’t “begin to imagine the heartbreak for this family.”