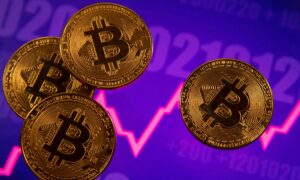 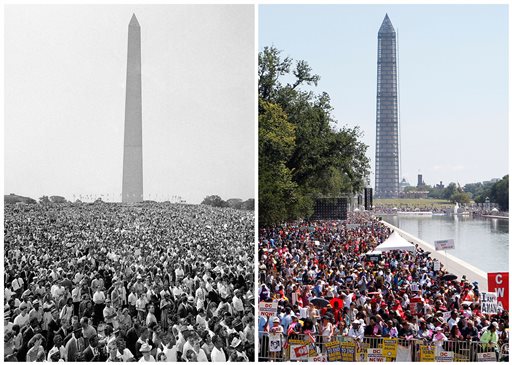 At left, a mass of demonstrators leaves the Washington Monument for the March on Washington on Aug. 28, 1963; and at right, people line the Reflecting Pool as they attend a rally to commemorate the 50th anniversary of the 1963 march on Saturday, Aug. 24, 2013. President Barack Obama will attend a ceremony Wednesday, Aug. 28, 2013, the anniversary of the Rev. Martin Luther King Jr.'s "I Have a Dream" speech. (AP Photo/File)
International

A Dawson City bar says it has been crippled after a patron swallowed the essential ingredient in its most famous drink: a human toe. The Downtown Hotel has become well known for its Sourtoe Cocktail: any kind of liquor – 40 per cent or higher – served with a preserved human toe bobbing in the glass. Patrons brave enough to try the drink are supposed to touch their lips to the toe, but not swallow it. …

The Globe and Mail

In 1995 I took a walk with a colleague along the canal from Maynooth to Kilcock. Coming up to a bridge we spotted that someone had painted “Brits Out!” on it. I sighed and observed that this was, “one man’s entire political philosophy summed up in just two words”. My companion replied: “But that’s republicanism, isn’t it?”

He had a point. At that time republicanism in Ireland was popularly (if unfairly – Irish republicanism has a rich historical body of thought) understood as being against British rule in the North; there was also idea that a republic was simply the opposite of a monarchy. …

Large-scale plantations of the hardy jatropha tree, Jatropha curcas, could help sequester carbon dioxide through a process known as ‘carbon farming’, according to a study based on data gathered in Mexico and Oman that was published in Earth System Dynamics …

“At times I have 180-200 traps set and I know where every one is. It’s all GPS-ed up here,” says Don Sallway, tapping his head. “I have around seven million acres stored away.”

In musical circles Trinidad has been recognised (at least from the days of Roaring Lion’s kaiso) as the land of calypso, steelpan and more recently, soca.

In the light of the recent Classical Music Development Foundation of T&T (CMDFTT) first annual competition, we may now have to revise this list and include the very first organic instrument discovered by humans: the voice. …

The state intelligence agency on Wednesday raided the homes and offices of several officials of a minor progressive party over an alleged security law breach, prosecutors said.

With a court-issued warrant, the National Intelligence Service (NIS) agents began searching the homes and offices of 10 officials and lawmakers of the Unified Progressive Party (UPP) including Rep. Lee Seok-ki, they said.

“(The UPP officials) are charged with conspiracy to stage a rebellion and violating the National Security Law,” said Choi Tae-won, a senior prosecutor of the Suwon District Prosecutors’ Office. …

A man who agreed to sign a contract with another to share a woman has been fired.

The butcher, Mr Sylvester Mwendwa, 26, who over the weekend openly declared his love for the widow said that his boss fired him after he heard the story.
Mr Mwendwa was not shy to reiterate his love for the woman saying: “I love her for real and I was ready to do anything for her even if it meant sharing her with another man,” even as he claimed that his life was in danger after receiving threatening messages.

After their relationship with Joyce Wambui and another man went public, Mr Mwendwa has now gone into hiding, fearing for his life. …

1.  50th anniversary of Martin Luther King Jr.’s “I have a dream” speech and the March on Washington; Obama to speak. President Barack Obama won’t need to mention race—a subject he doesn’t talk a lot about in public — when he stands at the Lincoln Memorial on the anniversary of the March on Washington. His presence at the commemorative ceremony Wednesday will embody the fulfilled dreams of the hundreds of thousands who rallied there 50 years ago for racial equality—and will personify the continued struggle for that elusive goal.

2. New York Times, Twitter, and other media websites allegedly attacked by Syrian Electronic Army. On Tuesday, the New York Times website went down for the second time this month. The Epoch Times was still unable to access the website as of Wednesday morning, though Isitdownrightnow.com reported it was again functioning. The Syrian Electronic Army is being blamed for an attack on an Australian Internet company that manages many major websites. The hacker group supports the Syrian regime and has been known to attack media outlets viewed as antagonistic toward the regime, reports Al Jazeera. Mark Frons, chief information officer of The New York Times, issued a statement Tuesday cited by NBC News saying the disruption “was the result of a malicious external attack by the Syrian Electronic Army or someone trying very hard to be them.”

3. NYPD designates mosques as terrorism organizations. The New York Police Department has secretly labeled entire mosques as terrorism organizations, a designation that allows police to use informants to record sermons and spy on imams, often without specific evidence of criminal wrongdoing. Designating an entire mosque as a terrorism enterprise means that anyone who attends prayer services there is a potential subject of an investigation and fair game for surveillance.

4. James DiMaggio’s sister speaks out. Lora DiMaggio, sister of the late alleged murderer and kidnapper James DiMaggio, told CNN in an exclusive interview published Wednesday she is skeptical about her brother’s guilt. She said she had told her brother that the 16-year-old Hannah Anderson, whom he kidnapped and whose family he allegedly murdered, was “trouble” and he should “watch out.” DiMaggio told CNN: “It’s very hard to believe that someone who was just so genuine and so dependable every single solitary day just woke up one day and decided to do this. In my heart of hearts, I think that Hannah perhaps got herself into a situation that she couldn’t get herself out of, and I do believe that my brother gave his life to protect her.”

5. US readies rationale for possible Syria strike. The Obama administration tried to bolster its case Tuesday for possible military action against Syria within days, with intelligence agencies preparing to release intercepted communications aimed at proving Bashar Assad perpetrated a large-scale chemical weapons attack on civilians. “There’s no doubt who is responsible for this heinous use of chemical weapons in Syria: the Syrian regime,” Vice President Joe Biden said. The U.S. and international partners were unlikely to undertake military action before Thursday. That’s when British Prime Minister David Cameron will convene an emergency meeting of Parliament where lawmakers are expected to vote on a motion clearing the way for a British response to the alleged chemical weapons attack.

6. Woman gouges 6-year-old’s eyes in China.  A woman tricked a 6-year-old boy into going into a field in northern China, and then gouged out his eyes, police said Wednesday. The boy’s brutal ordeal happened Saturday in a rural area of Linfen city in Shanxi province, the city’s police bureau said in a statement. State media said the boy was recovering in a hospital, but had lost his sight permanently. A police officer who only gave his surname, Liu, said he couldn’t speculate on a motive because the investigation was continuing.

7. California fire prompts unhealthy air warnings in Nevada. The giant wildfire burning at the edge of Yosemite National Park has not only destroyed buildings and threatened water supplies, electricity and sequoias, it has also unleashed a smoky haze that has worsened air quality more than 100 miles away in Nevada. The plume from the Rim Fire in California triggered emergency warnings in the Reno and Carson City area. Schoolchildren were kept inside for the second time in a week, people went to hospitals complaining of eye and throat irritation and officials urged people to avoid all physical activity outdoors.