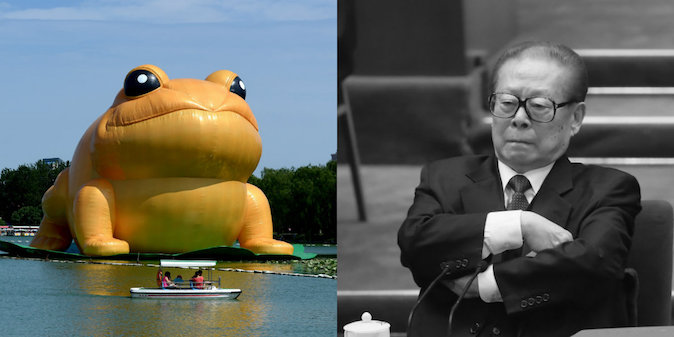 Toads Are No Longer Taboo on the Chinese Internet

In speculating on Party leader Xi Jinping’s anti-corruption campaign will take in 2016, many Chinese Internet users on popular Chinese microblogging website Sina Weibo feel that Xi should gun for the political backer of the so-called “tigers and flies”—high-ranking officials and lowly journeyman cadres—if he wants lasting success.

“Although many tigers have been purged, the tiger king remains. Some provincial level officials still have faith in the tiger king,” wrote Hualijia01, a Weibo-verified retired officer from the prosecuting agency in Inner Mongolia, in response to a post on the topic on Jan. 24.

Another netizen claiming to be a graduate of Fujian Normal University wrote: “Publicize the toad’s crimes: a Chinese traitor; sellout to Russia; organ trading crimes against humanity; and gross corruption. This criminal ringleader is notorious worldwide.”

In using the terms “tiger king” and “toad,” Chinese netizens are referring to Jiang Zemin, the former Communist Party boss and paramount regime power for nearly two decades. The non-censoring of netizen remarks and various public political gestures in recent months suggests that Xi Jinping will move to arrest Jiang this year, according to outspoken former Party officials.

Until this January, the regime’s censors have regularly deleted social media posts that use the word “toad” in political suspect situations. (Weiboscope, an online tool that tracks deleted posts on Weibo, lists over 140 keyword deletions in 2015.) Chinese citizens have for some years now referred to Jiang Zemin as a “toad” because bears a close resemblance to the amphibian with his thick, rounded spectacles and droopy, dewlap-like jowls.

The lack of censorship is a sign that Xi Jinping now has an “overwhelming advantage” over Jiang Zemin, according to Xin Ziling, the former director of the editorial desk at China National Defense University, the premier institution of higher education for defense officers in China.

In a telephone interview with Epoch Times, Xin said that Xi’s military reforms are giving him “firm control over the military,” placing him in an “untouchable” position. Dominance over the People’s Liberation Army, a powerful institution that belongs to the Party, not the nation, has long been held as benchmark of whether a Communist Party leader has genuine power or is merely a figurehead.

“The year 2016 can be said to be the year of the decisive battle,” added Xin, alluding to what some analysts of elite Party politics are calling a “struggle of life and death” between Xi Jinping and the Jiang faction.

This struggle, largely invisible in the first two years of Xi’s reign, was cast in the public eye in several brief, but clear instances over the past 13 months. Last year, two editorials in the state mouthpiece People’s Daily denounced so-called “iron-cap princes” and chastised former Party leaders who still sought to influence day-to-day political affairs—widely interpreted as coded references to Jiang Zemin and his closest confidant, former regime vice-president Zeng Qinghong. In August, a stone stele bearing the inscription of Jiang that was prominently displayed at the front of the Central Party School in Beijing was unceremoniously shifted inside the campus.

And Xi criticized some Party leaders for becoming a “Taishang Huang.” The term precisely translates to father of the emperor, but means “power behind the throne.” It’s a term that Chinese citizens recognize as being aimed squarely at Jiang Zemin, in a book of collected speeches on the need to maintain Party discipline that was distributed country wide at the start of the year.

Xi Jinping must have deliberated long and carefully before practically calling out Jiang Zemin and Zeng Qinghong, said Luo Yu, a division commander in the General Staff Department of the People’s Liberation Army who defected after the 1989 Tiananmen Square massacre, to overseas Chinese publication Kanzhongguo.

Luo reckons that Xi Jinping’s intentions towards Jiang Zemin will be made clear in “about two or three months.”

Frank Fang and Luo Ya contributed to this article.