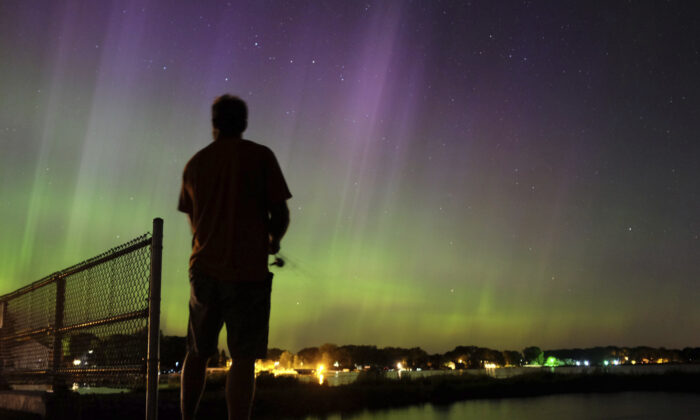 Wade Kitner looks at the northern lights as he fishes in Ventura, Iowa, on June 23, 2015. (Arian Schuessler/The Globe Gazette via AP)
Science News

Parts of Canada, Alaska and Russia might see the finale of a weekend lights show Sunday that started when a large solar flare erupted Thursday and became visible to Earth starting Saturday, forecasters said.

Many parts of the northern United States had foggy, rainy, or overcast skies that hindered views of the aurora borealis, or Northern Lights, meteorologists said.

But “Aurora may be visible at high latitudes, i.e., northern tier of the U.S. such as northern Michigan and Maine,” the National Oceanic and Atmospheric Administration’s Space Weather Prediction Center said Sunday. “Weak power grid fluctuations can occur.”

On Thursday, the sun launched what is called an “X-class solar flare” that was strong enough to spark a high-frequency radio blackout across parts of South America. The energy from that flare is trailed by a cluster of solar plasma and other material called a coronal mass ejection, or CME for short. That’s heading toward Earth, prompting the National Oceanic and Atmospheric Administration to issue a warning about a potentially strong geomagnetic storm.

It might sound like something from a science fiction movie. But really it just means that a good chunk of the northern part of the country may get treated to a light show called the aurora borealis, or Northern Lights.

Geomagnetic storms as big as what might be coming can produce displays of the lights that can be seen at high latitudes. It could also cause voltage irregularities on high-latitude power grids as the loss of radio contact on the sunlit side of the planet.