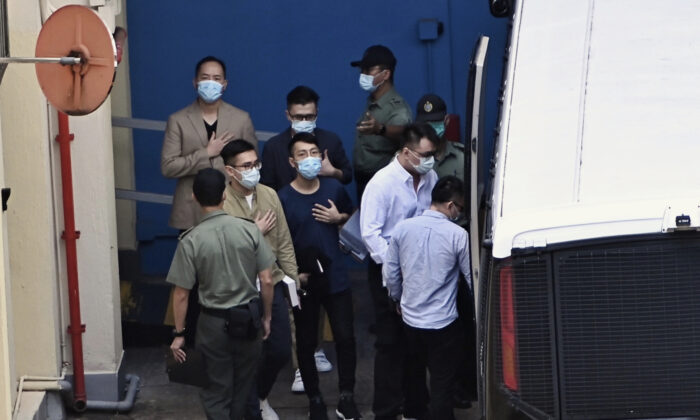 On July 8, 2021, in the democratic primary election case, more than 47 people were interrogated for the second time in the West Kowloon Magistracy. (Song Bi-long/The Epoch Times)
HK Current Affairs

To Plead Guilty or Not Guilty: Hong Kong Activists Share Their Thoughts

In this article, we report the views of three Hong Kong activists who had faced court cases, two were charged with offenses in connection to the civil protests in 2019/20, the other faced charges in related to the June 4th candlelight vigil in 2020. We explored their decisions on whether to plead guilty, or not guilty, and the reasons for their choice.

In 2019, a series of demonstrations in Hong Kong, known as the Anti-extradition Law Amendment Bill Movement (the 2019-2020 Hong Kong protests) broke out in Hong Kong. Many protesters were arrested, charged, and subsequently sentenced.

According to the information provided to the Hong Kong Legislative Council by the Secretary for Security, Chris Tang Ping-keung, on April 27, 2022: By Feb. 28, 2022, a total of 10,277 people had been arrested, of whom 1,172 were convicted. From the time that the National Security Law came into effect on June 30, 2020, up until March 2022, 175 people had been arrested on “suspicion of endangering national security,” with eight convictions to date.

In the case of the pan-democratic camp primary election, 53 people were arrested in early January 2021, 47 of them were charged with “conspiracy to subvert state power.” Some of the defendants were not released on bail and have been in custody for more than a year. As these cases have just been referred to the High Court for trial, it is expected that the trial will not start until the middle of next year at the earliest. “Imprisoned before trial” has become the new normal.

As a former British colony, Hong Kong inherited the tradition of British Common Law, and applies the principle of presumption of innocence, that is, suspects or defendants must be presumed innocent until proven guilty at trial.

According to Article 25 of the Basic Law, all Hong Kong residents are equal before the law, and Article 87 of the Basic Law provides that all persons are presumed innocent until convicted by a judicial authority.

However, in the past two years or so, cases of “imprisonment before trial” or “being forced to plead guilty” have been occurring, and there have been criticisms that the Hong Kong National Security Law violated the common law presumption of innocence, and that it reflected the CCP’s disregard for human rights granted by the Basic Law.

What is behind this “new normal?” The Epoch Times interviewed three people “who had been there,” former League of Social Democrats Chairman Ng Man-yuen, former Tsuen Wan District Councilor Chiu Yan-loy, and former Eastern District Councilor Chan Wing-tai, who shared their thoughts and experiences.

Ng: It is a False Accusation

Ng’s case was to be presided over by the same judge. He figured that since all the arguments had been presented by the nine defendants in the above mentioned cases, he didn’t think that he would have a different outcome. So, he decided to plead guilty. He estimated the sentence that he would have and prepared his family for it.

He said, “I knew that I would violate this law, but because we did not agree with this law, so we all decided to do it.”

Although Ng pleaded guilty, he did not think that he had done anything wrong, he said. He pleaded guilty out of the following considerations.

First, it would lessen the sentence and save a lot of legal fees, he said.

“It is a false accusation.” He added. Knowing that the regime has all the resources to “play the law” and that he will lose in the end and end up with a longer sentence, he decided that he might as well plead guilty. “This is a very personal decision,” he admitted. However, he pointed out, “in the process of trial, at least we let the world know that this is how the courts in Hong Kong interpreted the law.”

Some people may criticize that one should not “kneel down” just like that, but Ng felt that they may not understand the pressure the defendant is under. Ng believed that people would understand eventually and “history will prove that they are innocent.”

Chiu: I Don’t Think I Have Done Anything Wrong

In the afternoon of the 33rd anniversary of June 4th, former Hong Kong Alliance in Support of Patriotic Democratic Movements of China  committee member Chiu Yan-loy walked slowly from Victoria Park to Causeway Bay MTR station with six white roses and four red roses. As soon as he stepped into the area of Sogo Department Store, he was surrounded by the police and then “expelled” from Causeway Bay.

Chiu reflected on his experience. “I think this is actually a political prosecution. I really don’t think I have done anything wrong.”

He said, in the past three years, the “miscarriage of justice” under political suppression seems to have become very “common.” However, “common” does not mean that it is right, he added.

During his time in prison, he met many “protesters.” He said, “Many of them pleaded guilty, but they are not admitting any wrongdoing on their part, including me. The reason why people pleaded guilty was because they wanted to complete the sentence sooner and ‘go home’.

“When you don’t plead guilty and continue to fight, the sentence would be longer, and you may not actually be able to achieve what you want for your dream,” he said.

Chan: Pleading Guilty is a Technicality

Former Eastern District Council member Lancelot Chan Wing-tai was charged with “inciting others to knowingly participate in an unauthorized assembly.” The case relates to the day before the July 1 March in 2020, organized by Civil Human Rights Front but was unauthorized by the police.

All seven defendants in the same case pleaded guilty, except Chan. His hearing will be conducted at the end of June.

He said, “I will not plead guilty for one-third reduction on sentence. I do not believe that I am guilty.”

However, Chan noted that many activists who have been charged, have been “remanded in custody” in the past two years. He can understand why they would choose to plead guilty, as the time in prison could be used to count toward the sentence; and the sentence could be deducted by one-third.

Chan felt that people had too many misunderstandings about those who pleaded guilty. He believed that it was due to mental pressure, as well as the astronomical legal fees, not to mention that they are dealing with “regime crimes,” where the red line is difficult to determine, even for the regime itself.

“Not all of them are Tonyee Chow Hang-tung (a barrister and social activist), who can handle her own defense.” Chan added.