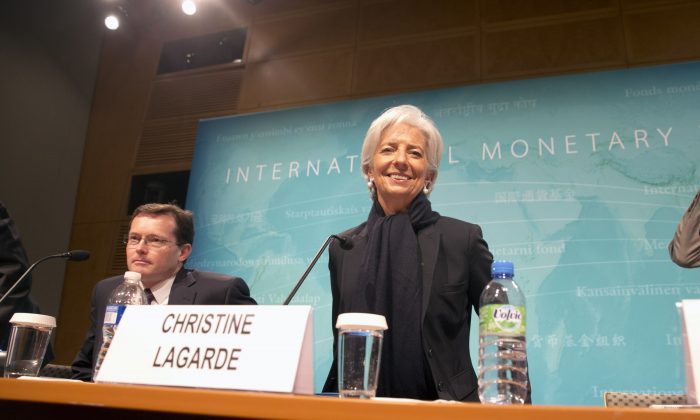 To Hike or Not to Hike? IMF Urges Fed to Delay Rate Increase

The International Monetary Fund on Thursday urged the Federal Reserve to put off raising short-term interest rates until next year because the U.S. economy still needs help.

In its yearly check-up of the United States, the IMF predicted the American economy would grow just 2.5 percent this year, down from its April forecast of 3.1 percent. The downgrade reflects the economy’s stumbling start to the year: Gross domestic product fell the first three months of 2015, tripped up by harsh winter weather and the export-killing strength of the dollar.

The IMF has no direct influence over U.S. economic policy. But the global lending agency is widely respected for its technical expertise on economics and finance.

Since December 2008, the Fed has kept the short-term interest rate it controls near zero. Fed Chair Janet Yellen last month said she expects to begin raising rates this year. Many economists expect a rate hike at the Fed’s September meeting.

A rate increase probably won’t have a big or immediate impact on most consumer loan rates.

For one thing, the Fed is expected to ratchet up rates only gradually. For another, rates don’t move in lockstep. Mortgage rates, for instance, are tethered to long-term rates such as the yield on the 10-year Treasury note. Those rates can move up or down based on things, such as foreigners’ hankering for the safety of U.S. Treasurys, that have little to do with the Fed.

Still, the Fed’s easy money policies have powered the American stock market to record levels, and investors hang onto Yellen’s every utterance.

Here’s a look at the competing cases for the Fed’s next move.

IMF Managing Director Christine Lagarde said the risks of raising rates too soon — and wounding the economy before it’s reached full strength — outweigh the risks of waiting a bit too long and allowing inflation to creep up.

“The economy would be better off with a rate hike in early 2016,” Lagarde said at a press conference.

The Commerce Department reported last week that the U.S. economy shrank at an annual rate of 0.7 percent from January through March. A widening trade deficit was largely to blame, reducing growth by 1.9 percentage points. The stronger dollar makes U.S. exports more expensive overseas and foreign imports cheaper in America.

Inflation still is well short of the Fed’s 2 percent target. The IMF doesn’t see it hitting that level until mid-2017. The inflation threat looks distant now: Consumer prices were lower in April than they’d been a year earlier, largely because of tumbling oil prices.

The IMF calls for the Fed to hold off on a rate increase until “there are greater signs of wage or price inflation than are currently evident.”

Despite the nasty first quarter, “we’re seeing more signs that the economy is gathering momentum and that a rate increase in September looks more appropriate,” said Bernard Baumohl, chief global economist at the Economic Outlook Group.

The job market certainly looks healthy. Employers are adding jobs — nearly 3 million over the past year — at a rate not seen since the boom years of 1998 to 2000. Unemployment fell in April to a seven-year low 5.4 percent.

If the Fed waits too long, it could lose its grip on inflation — and its inflation-fighting credibility with financial markets.

“If there’s a belief that the Federal Reserve is behind the curve in controlling inflation, more investors would lose confidence,” Baumohl said, arguing that inflation lags other signs of economic strength.

Another worry: Super-low interest rates encourage investors to seek higher returns in riskier investments. That can drive up the prices of stocks, long-term bonds and other investments to dangerous levels.

“The longer the Fed waits, the higher the price they are going to pay in terms of the market volatility that could occur including the potential of a crash in the stock market and the bond market,” said David Jones, an economist who has written several books on the Fed.