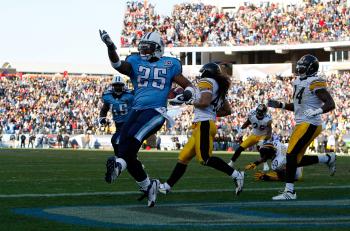 TOUCHDOWN RUN: Len Dale White celebrates after putting the Titans up by 10 in the fourth quarter against the Steelers. (Streeter Lecka/Getty Images)
NFL

Rahul Vaidyanath
Journalist
Rahul Vaidyanath is a journalist with The Epoch Times in Canada. His areas of expertise include the economy, financial markets, China, and national defence and security. He has worked for the Bank of Canada, Canada Mortgage and Housing Corp., and investment banks in Toronto, New York, and Los Angeles.
View profile
Follow
biggersmaller
Print
The Tennessee Titans (13–2) wrapped up first place in the AFC with a convincing 31–14 win at home over the Pittsburgh Steelers (11–4) on Sunday. The Titans put aside their disappointing one-point loss to the Houston Texans last week and became the first team to rack up over 300 yards in total offense against the top-ranked Steelers defense.

“Our defense came up big with sacks, turnovers, and interceptions. The offense was more efficient. We converted our third downs and fourth downs,” said Titans QB Kerry Collins after the game. Collins didn’t make any mistakes in his performance, throwing for a modest 216 yards while his counterpart, Ben Roethlisberger, lost two fumbles and was picked off twice.

“It was a tremendous effort out of all three phases of our team. I’m very pleased across the board,” said Titans coach Jeff Fisher in his post-game press conference.

“We needed a game like this against a real good team.

“This was the best game we played thus far.”

The youngest QB to ever win a Super Bowl, Ben Roethlisberger, fumbled on the Tennessee one-yard line mid-way through the first quarter. He then fumbled again early in the second quarter which led to a 34-yard pass from Collins to Justin Gage, giving the Titans a 10–0 lead.

That touchdown marked the first one the Steelers defense had allowed in the last 101 opponents’ plays. It also marked Tennessee’s first offensive touchdown in its last 86 plays.

But Roethlisberger has been very resilient all year and he led the Steelers to a 14–10 lead early in the third quarter with touchdown passes to Santonio Holmes and Hines Ward.

But from that point on, it was all Titans. The Steelers started to look like a tired team that was happy to settle for second best in the AFC.

The Titans were determined to run against the tough “steel curtain” and it proved effective as the dynamic duo of LenDale White and Chris Johnson racked up 117 yards. The Steelers missed linebacker James Harrison who had to leave the game early in the first half with a hip problem.

The turning point came on fourth and one at the Pittsburgh 21-yard line when Chris Johnson took the handoff, evaded one tackler behind the line of scrimmage, and then high-stepped it in for the TD.

With a 17–14 lead, the Titans added another score as LenDale white took it in from the one-yard line early in the fourth quarter.

The final nail in the coffin was hammered in by safety Michael Griffin who picked off “Big Ben” and returned the interception 83 yards to the end zone.

The Steelers came into the game on a five-game winning streak that included wins over the New England, Dallas, and Baltimore. They didn’t have enough gas in the tank to knock off the Titans, who had looked shaky against Houston last week.

“It was one of our top three games, could be number one just because of the magnitude of it. It just goes to show what type of team this is,” said Titans linebacker Keith Bulluck.

The Titans won the turnover battle 4–0 and Kerry Collins did more than simply “manage the game.”

The Titans started the year 10–0 and will finish as the AFC’s best team.

The New York Jets (9–6) fell a game back of both Miami (10–5) and New England (10–5) after more difficulty on the West coast. The Seattle Seahawks beat the Jets 13–3 on a snowy field in Seattle. The Jets are 0–4 in trips to the West coast this year, losing in San Diego, Oakland, San Francisco, and now, Seattle.

The loss means the Jets will need to beat Miami next Sunday and hope New England loses on the road in Buffalo or Baltimore loses at home to Jacksonville.