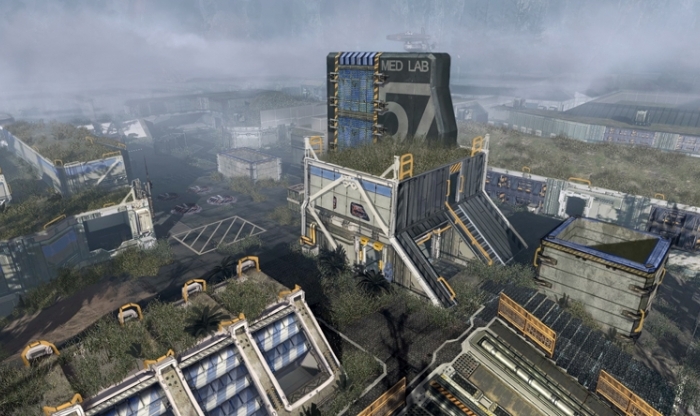 Respawn Entertainment has provided a preview of the second map in the upcoming Titanfall DLC.

“IMC Rising” joins “Frontier’s Edge” and “Expedition” as the third and final DLC to land for Titanfall.

The second map in “IMC Rising,” “Zone 18,” is set in an old Interstellar Manufactoring Corporation base “hidden in the vast wilderness of the Dakota system,” which still conducts research after the destruction of the old Hammond Robotics’ headquarters in Titanfall’s final campaign mission.

Respawn developer Geoff Smith notes that the map was based off an early version of Last Titan Standing.

“It was a basic mirrored layout that was almost a paintball field for Titans,” Smith writes.

Smith decided to tweak the map layout to allow pilots to get around a little easier, which is an important factor considering the new 8 versus 8 pilot-only deathmatch mode that will be introduced in “IMC Rising.”

In order to force pilot engagement, Smith made the rooftops in the map roughly the same height. Doing so would prevent players from camping out on the highest elevated point on the map, which allowed them to avoid ground combat and get superior firing lines over their enemies.

Smith also placed the three hardpoints in the map in a line and linked them with underground hallways, which makes it difficult for players to avoid each other.

Thus, the end result is a fast-paced map that doesn’t allow pilots to take to the roofs for safety.

“IMC Rising” will be sold for $9.99. Gamers who have purchased the Titanfall Season Pass for $24.99 will get the DLC once it is out.