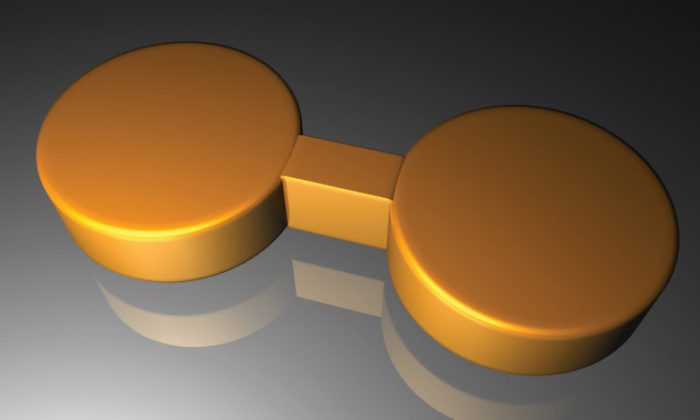 In a series of experiments, the researchers linked pairs of puck-shaped metal nanodisks with metallic nanowires and showed how the flow of current at optical frequencies through the nanowires produced “charge transfer plasmons” with unique optical signatures.

“The push to continually increase the speed of microchip components has researchers looking at nanoscale devices and components that operate at optical frequencies for next-generation electronics,” says Naomi Halas, the lead scientist on the study and director of Rice University’s Laboratory for Nanophotonics (LANP).

Halas’ lab specializes in the study of nanoparticles that interact with light. For example, some metallic nanoparticles convert light into plasmons, waves of electrons that flow like a fluid across the particle’s surface.

In dozens of studies over the past two decades, LANP researchers have explored the basic physics of plasmonics and shown how plasmonic interactions can be harnessed for applications as diverse as medical diagnostics, cancer treatment, solar-energy collection, and optical computing.

One type of plasmonic interaction that Halas’ team has long studied is plasmonic coupling, a kind of interacting dance that plasmons engage in when two or more plasmonic particles are located near one another.

For instance, when two puck-shaped plasmonic nanodisks are located near one another, they act like a tiny, light-activated capacitor. When a conducting wire is used to bridge the two, their plasmon energies change and a new resonance called a “charge transfer” plasmon, appears at a distinct frequency.

In the new research, lead author Fangfang Wen, a graduate student at LANP, examined the optical properties of pairs of bridged nanodisks. When she created plasmons in the pairs, she observed the charge flowing back and forth along the wires at optical frequencies. In examining the charge transfer plasmons in these pairs, she discovered that the electrical current flowing across the junction introduced a characteristic optical signature.

“In the case where a conducting wire was present in the junction, we saw an optical signature that was very different from the case without a wire,” Wen says. Wen then set up a series of experiments where she varied the width and shape of the bridging nanowires and repeated these measurements for nanowires of two different metals, gold and aluminum.

These experiments, reported in ACS Nano, reveal two key findings. First, at the low end of the conductance scale, she found that even the slightest changes in conductivity resulted in notable optical shifts—a finding that could be particularly interesting for molecular-electronics researchers who are interested in measuring conductivity in structures as small as a single molecule.

This specificity and repeatability could also be useful to researchers who might want to use this approach to identify the conductance of nanowires, or other nanoscale electronic components, at optical frequencies. “The optical frequency conductance of most materials is not known,” she says. “This provides a useful and practical method to measure this property.

“To reduce the size of electronics even beyond today’s limits, scientists want to study electron transfer through a single molecule, particularly at extremely high, even optical frequencies,” Wen says.

“Such changes cannot be measured using standard electronic devices or instruments that operate at microwave frequencies. Our research provides a new platform for the measurement of nanoscale conductance at optical frequencies.”

The Robert A. Welch Foundation, the Department of Defense’s National Security Science and Engineering Faculty Fellowship Program, the Defense Threat Reduction Agency, the Air Force Office of Scientific Research, and the Army supported the work.