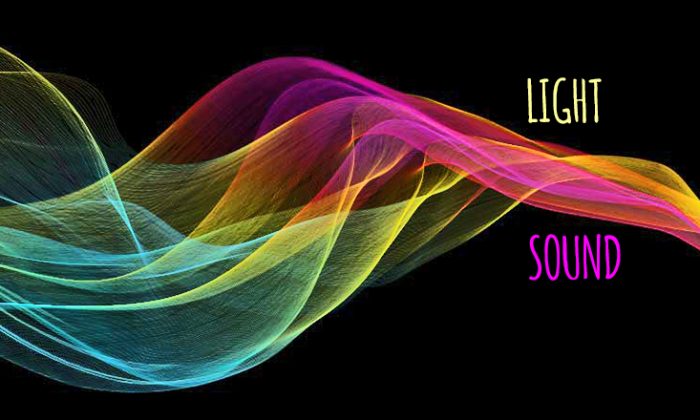 The terahertz gap is a sliver between the microwave and infrared bands of the electromagnetic spectrum. A new device converts T-ray light into ultrasound waves, making them easier to detect. (University of Michigan)
Tech

Engineers have created a device that detects terahertz frequencies by converting them into sound waves and then transmitting them.

Terahertz light is not visible to humans, and scientists have struggled to develop a practical way to detect it. Current detectors are bulky and need to be kept cold to operate.

That limits their usefulness for applications like weapons and chemical detection and medical imaging and diagnosis, says Jay Guo, an engineering professor at the University of Michigan.

“Our detector is sensitive, compact and works at room temperature, and we’ve made it using an unconventional approach.”

Guo and colleagues invented a special transducer that makes the light-to-sound conversion possible. A transducer turns one form of energy into another. In this case it turns terahertz light into ultrasound waves and then transmits them.

The transducer is made of a mixture of a spongy plastic called polydimethylsiloxane, or PDMS, and carbon nanotubes.

When the terahertz light hits the transducer, the nanotubes absorb it, turning it into heat. They pass that heat on to the PDMS. The heated PDMS expands, creating an outgoing pressure wave.

That’s the ultrasound wave. It’s more than 1,000 times too high for human ears to pick up.

“There are many ways to detect ultrasound,” Guo says. “We transformed a difficult problem into a problem that’s already been solved.”

Though ultrasound detectors exist—including those used in medical imaging—the researchers made their own sensitive one in the form of a microscopic plastic ring known as a microring resonator. The structure measures only a few millimeters in size.

They connected their system to a computer and demonstrated that they could use it to scan and produce an image of an aluminum cross.

The response speed of the new detector is a fraction of a millionth of a second, which Guo says can enable real-time terahertz imaging in many areas.

The system is different from other heat-based terahertz detection systems because it responds to the energy of individual terahertz light pulses, rather than a continuous stream of T-rays. Because of this, it isn’t sensitive to variations in the outside temperature, Guo says.

The study is published online in Nature Photonics. The National Science Foundation and the Air Force Office of Scientific Research funded the work.