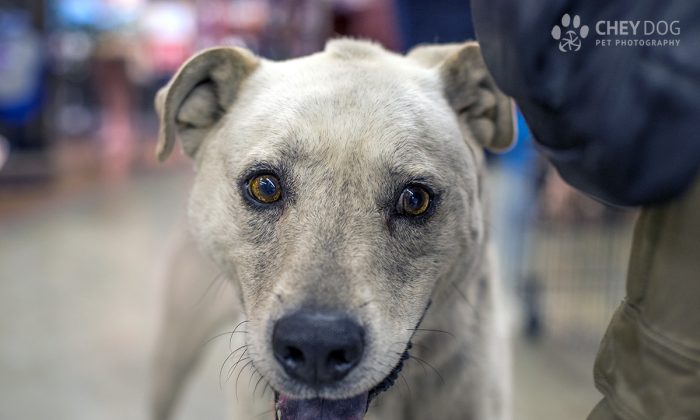 Three-year-old Zayden is one of the dogs on Tinder. According to his profile, Zayden “likes to cuddle and be around people… He gets a little excited when passing other dogs but gets over it quick with a little tug of the leash.” (Photo Courtesy of Social Tees)
Animals

The profiles were posted by interns at the ad agency BBH, as part of a project to make a catchy campaign.

And the ten profiles did catch on. In less than a week the dogs had 2700 matches, according to BBH.

#TinderMoments from Tinder on Vimeo.

The dogs are from Social Tees, an animal shelter in the East Village. Tinder had nothing to do with the campaign.

No dogs have yet been adopted as a result of the campaign, but it did cause a small media buzz with publications like Time and TechCrunch picking up the story.

This response was what Social Tees had hoped for, even more than adoptions.

“We were so excited for all the coverage though, because it’s just so neat to see people get really jazzed about dogs and rescue,” said Samantha Brody, Social Tees’ development manager

“We really just wanted this project to raise awareness,” she said.

Brody said many people aren’t aware of the rescue situation in New York City, with shelters having to euthanize abandoned cats and dogs to make space for new arrivals.

Animal Care and Control of NYC (AC&C), the city’s primary rescue organization, has an agreement with the city to take in all abandoned animals, which means it won’t turn any homeless animal away, but it might have to kill one to make room for it.

According to it’s website, AC&C right now has a surplus of cats and has lowered its adoption fees to $5 for adults and $20 for kittens. A recent four-day adoption blitz succeeded in finding homes for 73 cats, but during that same time, AC&C received over 250 cats.

In 2012, it took in nearly 29 thousand animals and had to euthanize almost 7 thousand. It was able to find homes for nearly 19 thousand.

Animals are euthanized if they are sick, have behavior problems, or the shelter runs out of space. Sometimes having a common cold is enough to put an animal on the euthanasia list, Brody said.

Social Tees gets about 90 percent of its animals from other shelters in the city. It is privately owned so they only take in as many animals as they can handle and never have to euthanize for space reasons. They keep cats on site but find foster homes for most of their dogs until they can be adopted.

One reason many animals end up in shelters is that people don’t realize how much energy it takes to care for a pet.

“A lot of people really need to know what they are getting into when they decide to buy or adopt, have an animal because a lot of the animals are incredibly wonderful animals with no behavior issues, no health issues,” she said.

Two of the dogs profiled on Tinder have been adopted out, although not because of the profiles. The other eight are still waiting for homes.