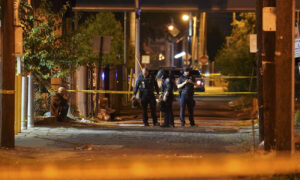 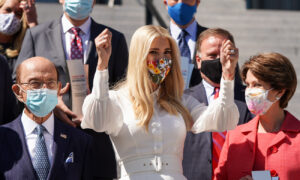 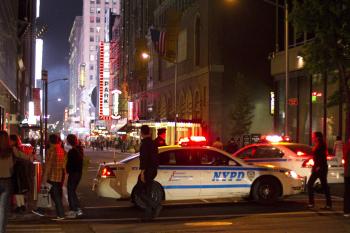 Police cordoned off a significant portion of Times Square, Manhattan, after police were alerted to a possible bomb in the area. (Jan Jekielek/The Epoch Times)
US

By Benjamin Chasteen
Print
NEW YORK—Part of Times Square, known as the Crossroads of the World, was shut down and evacuated tonight by police due to an apparent bomb threat.

Sometime after 6pm, an SUV appeared to be smoking, having caught fire. When assessing the situation, Police found that the license plates on the SUV did not match that vehicle. Further investigation revealed a suspicious package in the back of the vehicle's back seat.

Soon the NYPD bomb squad arrived on the scene to inspect the package. Using a robot, the bomb squad was able to explode the package in a safe and secure way. According to eyewitnesses, the sound of the blast could be heard a couple blocks away, reported CBS.

Anthony Ogburn was on the scene in Times Square, celebrating his 50th birthday. He heard that a homeless man, a regular in the area, had tipped off the police that a car was "smoking" in the vicinity of Times Square.

"Everything was cleared out, just like that," said Ogburn, referring to the streets that were evacuated by police.

"Only in New York!" Ogburn added. "Where else would that happen if a car was just smoking?"

The call was made around 6:30 p.m., and the SUV was parked near 44th street and 7th ave. Police blocked off Times Square from 42nd st to 47th along Broadway. As of 11:00pm the police still had that part of Times Square blocked off.

Aside from disrupting traffic and pedestrians, the bomb scare also delayed many Broadway shows in the area.

With reporting by Jan Jekielek