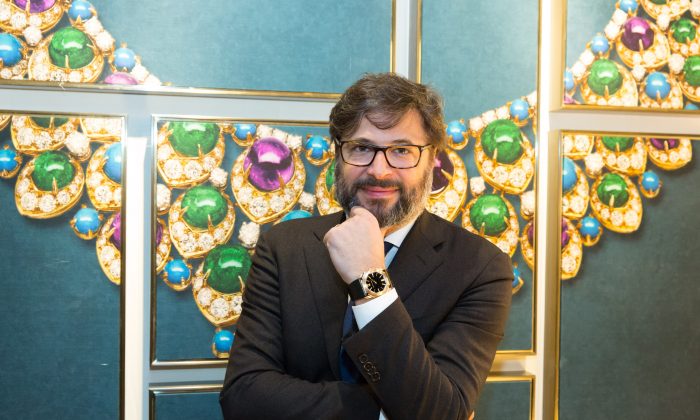 Founded in 1884 by Greek silversmith Sotirios Bulgari, the luxury brand that carries his surname is undoubtedly all Roman.

While most watch brands are based in Geneva and Italian fashion brands choose Milan as headquarters, Bulgari has stayed true to Rome. Its many product lines, which include jewelry, watches, fragrances, and accessories, are informed by a Roman aesthetic that is inspired by the city’s architecture, lifestyle, and a certain Roman mindset.

Guido Terreni, managing director of Bulgari Watches, spoke to the Epoch Times about Bulgari’s Roman DNA, the brand’s distinctive features, and the new timepieces at this year’s Baselworld.

Epoch Times: What is the DNA of Bulgari? And what makes your brand unique?

Guido Terreni: First of all we have to start with the fact that we are a Roman brand. In hard luxury, there are no Italian brands. You have Geneva-based companies, especially in the watches. Or you have French-based companies. We are one of the leaders in hard luxury, rooted in jewelry, and we come from Rome.

From a cultural point of view, Italians, and especially Romans, are much different from Swiss or French. The way of living and enjoying life in Italy is very different.

In hard luxury, you’re used to following a rule or an etiquette. As Romans, we have DNA that is very different because you make your own rules in the way you live. That’s about being Italian and being Roman. The self-confidence the Romans have is telling you that you’re going to behave, even if you don’t respect the etiquette or protocol or a way of living.

This is due to the fact that Rome ruled the world 2,000 years ago. When you have a DNA like that, you don’t ask for permission. You just do what you want. That is in the DNA of the brand.

So going back to our DNA, as Romans, this is inspired by many, many years of having the serpenti in our brand. Cleopatra brought the “serpent” (snakes) to Rome, it came to Rome for love.

We do not follow others in doing a feminine watch, just by taking a men’s watch, making it a little bit smaller, putting some diamonds and fancy colour on the dial. That’s not how we treat a woman. It has to be something specific for her.

Bulgari became internationally famous with the Dolce Vita period. It is a period in which actors from Hollywood came to Rome because of Cinecittà. It was the Hollywood of Italy in the 1950s and 1960s. And they discovered the easygoing, fun, and exciting life in Italy.

The divas of that period discovered Bulgari. And Bulgari became jeweler of stars. When you have that type of customer, you have a charm and excitement. It is the true charm of these people.

And on the men’s side, it is the same. We have a watch like the Octo, which is standing out. It’s an architectural design, an expression of contemporary design. We never go back to traditional designs. It’s something that’s designed for today. And 20, 30, 40 years from now it still has to be very contemporary. And this is true for the Bvlgari Bvlgari, that was designed 40 years ago and is still is very active.

We don’t act like a Geneva-based company. It’s not how Italians enjoy life.
— Guido Terreni, Bulgari

So we don’t act like a Geneva-based company. It’s not how Italians enjoy life. We want to have an exuberant creativity with a tremendous level of sophistication.

Epoch Times: How about the Greek origins of the brand?

He was a silversmith, so he started doing jewels, silver, and then gold. So I would say the origins are Greek, but the expression is Roman. The brand is really Roman. When you are a Roman, or Italian, you have a quest for elegance and beauty. That is a talent.

And doing a watch design is something as difficult as doing a grand complication. So you’re combining this Italian cultural elegance with the savoir-faire in Switzerland in making watches.

Epoch Times: How does this translate into your marketing and communication strategy for the global consumers? How do you keep the balance between the brand’s consistency and cultural sensitivity?

Serpenti, launched in 2010, clearly shows that. And the Bvlgari Bvlgari is another expression of boldness. It is an expression of Roman culture.

Roman emperors used to write their own names and Rome on coins, like Caesar, Roma. And we have Bulgari, Roma. This is so creative and bold. … Rome gives us the boldness, the personality.

Rome gives us the boldness, the personality.
— Guido Terreni, Bulgari

Epoch Times: And the influence from the Roman architecture …

Mr. Terreni: It’s an endless source of inspiration. These are all contemporary objects. Because they always say, I’m not interested in buying a watch that is an expression of somebody else’s time.

When you look at other watches, you see these gold round watches, very discreet and old fashioned. It’s what my grandfather used to wear. I don’t drive his car, I don’t wear his clothes, why should I wear his watch? That’s the way we see luxury, how you should enjoy a timepiece.

Epoch Times: How do you take the heritage from the past and make it relevant to the modern day consumer?

Mr. Terreni: That is part of the culture that we have. We are a very cultivated brand in terms of design. It is in the DNA of the brand.

For example, we have two new watches that we’re introducing this year on the Serpenti. We keep evolving and this gives you a much younger flavor, and it is a bit more glamorous. When you look at this 10, 20 years from now you will still like it.

It is called Serpenti Incantati. It’s a new version of the Serpenti. Not many people prefer snake that folds around the wrist, so this Incantati is folding around the watch. So you have the jewellery watch that is round and still playing the theme of the snake.

The brand is the leader in gemstones.
— Guido Terreni, Bulgari

Epoch Times: The gemstones are in ruby color. Is there anything significant about it from a cultural standpoint?

Mr. Terreni: The brand is the leader in gemstones. We’ve been using coloured gemstones. This is a tribute that we put in our watches. We also have a collection with amethyst color. We really play with nature.

Epoch Times: What kind of women consumers will be among the first to wear your collection before anybody else?

Mr. Terreni: When I’m asked this question, everybody expects me to answer by custom or nationality. I never use that. Because in every culture, in every nationality, you have a Bulgari client. It’s a question of confidence level.

As I mentioned earlier, Rome is about the boldness of the client. This speaks to women and men who make their own rules. Who have a strong personality, who are refined and have a sensitivity for aesthetics.

For ladies, it’s a little bit easier because we have 130 years of history in jewellery. The ladies’ watches always have a strong link to jewellery, the Serpenti Collection.

On the men’s side, it’s really a statement of aesthetic. Our new watch Octo Finissimo Minute Repeater is the star of the fair this year. It is the thinnest minute repeater in the world. We already made the thinnest tourbillon two years ago. This piece is extremely contemporary, very modern.

It’s one of the most difficult complications. I think there are a few brands that can do something like this. This is done completely in-house with the savoir-faire in watchmaking. And it is done in a style, which is different from the rest.

In difficult times, brands try to defend themselves. We do exactly the opposite.
— Guido Terreni, Bulgari

Epoch Times: Tell us more about the watch you’re wearing.

Mr. Terreni: It’s very architectural. This is my personal watch since 2012. It’s the father of the Octo Collection and I always appreciate it because it’s very contemporary, very masculine. I love the masculinity of the Octo and I love the fact that you can recognize it from 10 meters [about 30 feet] away and it’s not what everybody is wearing. It’s a question of exclusivity.

Epoch Times: What are the key trends you observe in global markets?

Mr. Terreni: I see a lot of brands are playing with the Chinese zodiac. We’re not doing that. I have too much respect for Chinese culture. And if there are people buying it, I won’t judge. But I think it’s important to make people understand the DNA.

In difficult times, brands try to defend themselves. We do exactly the opposite, we become even more creative and make people understand who we are. I think in difficult moments, you have a great opportunity of gaining market share through this strategy.