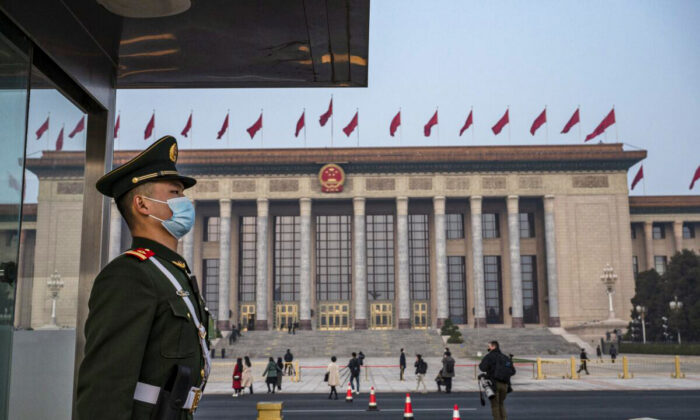 Time to Call Communist China What It Has Always Been: A Rogue Nation

When will the rest of the world ever learn?

With their well-orchestrated intimidation of Taiwan in response to U.S. Speaker of the House Nancy Pelosi’s brief visit to Taipei on Aug. 2, the Chinese communists have once again removed their masks for all the world to see.

Under the leadership of Xi Jinping, who regularly pontificates about China “leading the world” in this, that, or the other—as well as the inevitability of Chinese domination in all spheres of human endeavors—the Chinese Communist Party’s (CCP) bellicosity, belligerence, and boisterousness seem to grow day by day.

Fifty years of appeasement and economic engagement with Red China have conditioned the United States and world media, and many “pro-CCP” politicians to understate and excuse the various crises instigated by the CCP. When will the rest of the world ever learn that Beijing’s promises are worthless—and that the promised benefits to the world of appeasing communist China are completely ephemeral and indeed dangerous?

Here’s an example from the Hong Kong takeover era—just two short years ago!—from the appeasers at The New York Times: “Hong Kong is China, Like it or Not.” Never mind that Beijing violated its own treaty pledges by unilaterally ending Hong Kong’s separate legal status and the “one country, two systems” framework and imposing the communists’ draconian national security law on the former British colony. That communist promise was worthless.

Then there was this piece about China-Tibet relations from The Associated Press in 2021: “China Offers Glimpse of Tibetan Life without the Dalai Lama.” The title itself is an insult to many Tibetans who follow closely and try to live their lives according to the teachings of the exiled Dalai Lama.

The AP article touts this communist propaganda prominently displayed in Lhasa, “Xi Jinping’s new socialist ideology with Chinese characteristics is the guide for the whole party and all nationalities to fight for the great rejuvenation of China,” while essentially conveying the CCP’s line that Tibet has effectively been “sinicized” ostensibly to the benefit of all Tibetans.

Never mind that Tibet was a separate country for over 2,000 years until the People’s Liberation Army (PLA) invaded and occupied eastern Tibet in 1951, forcing the Tibetans to sign the 17-point “Agreement on Measures for the Peaceful Liberation of Tibet.” Or the subsequent imprisonment, beating, torture, and “reeducation” for decades of Tibetans who refused to assimilate into the godless Chinese state. But the AP managed to convey the CCP’s ongoing persecution of Tibetans as somehow a “good thing.”

The Uyghurs, Falun Gong, and other religious and ethnic minorities in China have had their own terrible experiences at the hands of the CCP. In contrast, foreign appeasers from political circles, multinational corporations, academia, media, and others have gotten rich through CCP bribes and corruption.

What other civilized country treats its indigenous minorities as harshly as the communist Chinese treat their own?

What other country guilty of these horrible human rights violations is treated with deference and kowtowing besides communist China?

How can the appeasers continue to look the other way? What will it take to admit that Chinese appeasement has been an abject failure?

Appeasement in the Face of PLA Intimidation

Those same appeasers and supporters of “cooperation, competition, and engagement” with China were hard at work surrounding Pelosi’s trip to Taiwan. Note the soft-on-China messages:

Bloomberg reported on Aug. 3 that China appeasers in the Biden administration are “lobbying Democratic senators to put the brakes on a bill that would alter US policy toward Taiwan, including by designating it as a major non-NATO ally.”

Just when a show of strength and deterrence was needed in response to the Chinese military belligerence, the Biden administration decided on Aug. 4 to postpone a long-scheduled Minuteman-III intercontinental ballistic missile test, ostensibly to “lessen tensions with communist China,” as reported here.

A Bloomberg piece on Aug. 5 claimed that “Beijing may continue to escalate its response.” What civilized country responds to a less-than-one-day visit by a career politician with large-scale coordinated military exercises like China did?

A Reuters article on Aug. 7 stated that “Chinese and Taiwanese warships played high seas’ cat and mouse.'” That’s how Reuters described the unprecedented PLA/PLA Navy intimidation of Taiwan that continued into its fifth day.

And the editorial board at The New York Times weighed in on Aug. 6 with a piece titled, “The U.S. Relationship With China Does Not Need to Be So Tense.” The situation is “tense” because the communists have made it so. Now is not the time to show weakness in the face of PLA belligerence (assuming the Biden administration believes in deterring the CCP at all). Instead, the op-ed argues for a return to the failed “cooperation, competition and engagement” policies that have led to the PLA’s military buildup that made the intimidation of Taiwan possible!

Xi Jinping’s 10-year rule has been marked by increasing bellicosity and belligerence in communist China’s diplomatic, military, and economic interactions with the rest of the world. Xi’s Belt and Road Initiative creates debt traps for developing countries that accept the communists’ gifts/loans. The PLA regularly intimidates neighboring countries, including Japan, the Philippines, Australia, Vietnam, and South Korea. And the “wolf warriors” in Beijing’s diplomatic corps routinely issue threats to targeted countries, especially to the United States, Japan, Australia, and the United Kingdom.

The CCP has developed a playbook for hybrid warfare to achieve its regional and global dominance objectives laid out by Xi. Various aspects of the playbook are being implemented against the United States, Japan, Australia, India, the Philippines, and of course, Taiwan.

That playbook includes these actions: set a target/goal/objective and propagate that goal via state-run media; undermine international conventions and norms; subvert and exploit international institutions to align them with CCP policies; use psychological/information warfare to achieve all objectives; ignore past treaties and commitments; exploit the communists’ new national security law; intimidate others (via the diplomatic corps, Chinese coast guard, navy, and air force overflights, etc.); leverage appeasers/China hands to create an echo chamber; vehemently denounce all attempts to defeat and deter CCP policies.

What other civilized country makes threats against neighboring nations and others like the following?

In May 2021, state-run Global Times threatened “long-range strikes on the military facilities and relevant key facilities on Australian soil” if it aids Taiwan in a future conflict.

In July 2021, the Center for Security Policy reported that “China has threatened to ‘nuke Japan continuously’ if Japan supports the US in protecting Taiwan from a Chinese invasion.”

With impunity, China has built and militarized islands in the East China and South China seas claimed by other nations.

Beijing regularly engages in saber-rattling in contested areas along the India-China border and has been meddling in Kashmir.

According to The Australian, Hu Xijin, a former editor of state-run Global Times, urged the PLA to “shoot her [Nancy Pelosi] down.” Hu fanned the flames of Chinese communist nationalism for years at Global Times and is a reliable mouthpiece for the Beijing regime, no doubt expressing the sentiments of many communists.

The day before Pelosi visited Taiwan, Global Times blared that her visit “won’t be tolerated.” Not the action of a government-run media shop in a civilized country.

On the day of Pelosi’s visit, Global Times headlined that the PLA “will not sit idly by.” That was a direct military threat against the United States and other countries committed to defending Taiwan.

According to Taiwan News, “China’s Ambassador to France Lu Shaye (盧沙野) on Wednesday (Aug. 3) claimed that Beijing would impose reeducation after it annexes Taiwan.” The communists apparently have plans to keep their Uyghur and Tibetan reeducation camps going with “other tasking.”

The Wall Street Journal reported that “Chinese aircraft and ships crossed the midway mark of the Taiwan Strait” into the Taiwanese air defense identification zone (ADIZ) to conduct simulated attacks on Taiwan.

Are these the actions of a civilized country?

What defines whether a country is a “rogue nation”? A classic definition of a rogue nation is “a state that does not respect other states in its international actions.” To that definition can be added the following:

Only a rogue nation and one that refuses to conform to international consensus and the rule of law makes threats such as those described above by the CCP against other sovereign nations. In short, a rogue nation like China should be returned to its pre-1972 status as a pariah (outcast).

It is long past time for the appeasers and “China hands” who have favored dialog, cooperation, competition, and engagement with communist China since 1972 to call a spade a spade and admit the error of their ways.