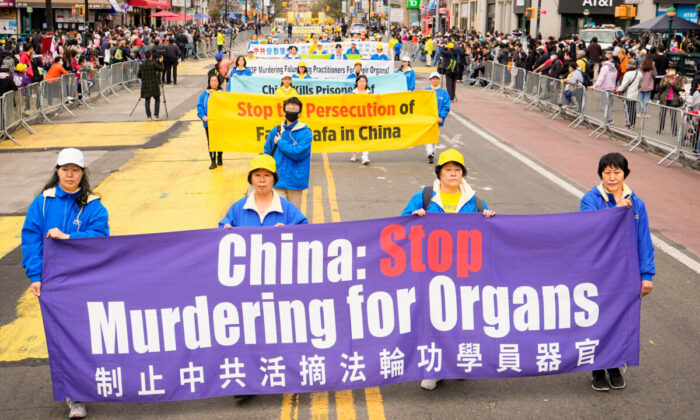 ‘Time to Break the Silence’: Medical Community Urged to Stand Against China’s Ongoing Murder for Organs

Lack of media coverage, institutional silence, self-censorship, and fear of Beijing’s retribution are among the reasons that many people, including those in the medical sector, are unaware of China’s ongoing state-sanctioned practice of killing innocents for their organs.

“In my experience, less than 10 percent of the entire medical community actually knows what forced organ harvesting is. And even less than that, actually, just a fraction of that has any kind of understanding of a tribunal or the massive amount of data that’s out there,” said G. Weldon Gilcrease, associate professor of medicine at the University of Utah and DAFOH deputy director, during the roundtable.

The Chinese regime has been killing prisoners of conscience for their organs to supply the transplant market for over a decade. In 2019, an independent panel, called the China Tribunal, found that such practice was happening “on a significant scale” in China. It concluded that such actions amounted to crimes against humanity, with Falun Gong practitioners being the main source of organs.

Martin Elliott, who was a member of the China Tribunal and a professor of cardiothoracic surgery at the University College London, said that reviewing the evidence of organ harvesting gave him a sense of “horror.”

“We were almost unwilling to believe it and took a very cautious approach to the evidence, which was extremely weighty, collected by very brave people for a long period of time,” he said. “But in the end, the disparity between the number of not official donors and the number of transplants, the short waiting times, the financial transactions which were exposed by the telephone calls, made it impossible for us to conclude anything other than it was taking place.”

Gilcrease recalled how his university rejected his proposal for holding a talk with the local transplant and legal communities about China’s forced organ harvesting in late 2019, after the China Tribunal published its findings.

“So when I went to one of our senior leadership officials and said, ‘look, we need to at least sit down and talk about it, and talk about our potential complicity … in training people from China to come here, learn transplant and go back to China and be involved in these crimes against humanity [that] are likely genocidal acts of killing innocent people for organs,’” Gilcrease said.

He continued: “I was essentially told there was no doubt that it [forced organ harvesting] was happening. But there was a concern that if we said anything as a medical center, that China would send all of their students to Texas [instead of Utah]. That was the response I was given.”

Falun Gong, also known as Falun Dafa, is a spiritual practice involving meditative exercises and a set of moral teachings centered around the tenets of truthfulness, compassion, and tolerance. The practice surged in popularity in China during the 1990s with an estimated 70 million to 100 million adherents, but this was deemed a threat to the communist regime’s control.

In 1999, practitioners became the target of a nationwide persecution campaign launched by former Chinese leader Jiang Zemin, who established the Gestapo-like office known as the “610 Office” to execute his campaign of elimination.

Since then, millions of detained Falun Gong practitioners have essentially become a large involuntary organ bank for the Chinese regime’s transplant industry. The supply of organs has turned China into a top destination for transplant tourism because Chinese hospitals often offer short waiting times for matching organs for patients, much faster than developed countries with established organ donation systems.

“What I was seeing within our community is that individuals were personally censoring themselves in getting engaged in the discussion [about forced organ harvesting],” David Beyda, the chair and professor of bioethics and medical humanism at the University of Arizona, said during the roundtable.

“Sometimes it [the censorship] was institutional,” Beyda added.

Beyda warned that while the Chinese regime is the perpetrator here, there is also the issue of being complicit in its crimes.

“The more personal you get with your personal censorship, the more complicit you become,” he explained.

“So on both sides, we have an organ recipient, who is just as much at fault, and being complicit in a murder of someone as the surgeons who are doing this,” Beyda added.

A recent study published in the American Journal of Transplantation concluded that Chinese surgeons and other medical workers have been acting as “executioners” for the communist regime. It documented cases from 71 Chinese-language science publications which showed that organ procurement occurred before patients were declared brain dead.

Some medical professionals simply couldn’t believe that their Chinese counterparts would be involved in forced organ harvesting, according to Jacob Lavee, founder of the Heart Transplantation Unit at the Leviev Heart Center in Israel and professor of surgery emeritus at Tel Aviv University.

“After all the evidence gathered by the China Tribunal, and after all the hundreds of papers published about it, our colleagues still find it hard to believe that our colleagues back in China are taking part in these atrocities,” Lavee said.

Alejandro Centurion, a neurologist and a DAFOH member, urged the American Medical Association (AMA) to take a stronger stand on the issue.

The AMA, according to Centurion, has not made a “formal statement” on China’s forced organ harvesting other than a “small statement” last year and it was “very superficial” without mentioning the China Tribunal.

“So we need to see leadership from the AMA. I would really urge them to do so,” Centurion said, adding that it was encouraging to see the British and the Canadian Medical Associations taking the stance in condemning the regime’s forced organ harvesting.

Torsten Trey, DAFOH’s executive director, called on more people to speak up against the atrocity.

“Organ harvesting from living prisoners of conscience can by no means or excuse be accepted in today’s global community and every doctor and every individual has to make a decision,” Trey said.

“Do I want to live in a world where a government can arbitrarily kill innocent people for the organs or do I speak up now?

“I think it is time to break the silence.”