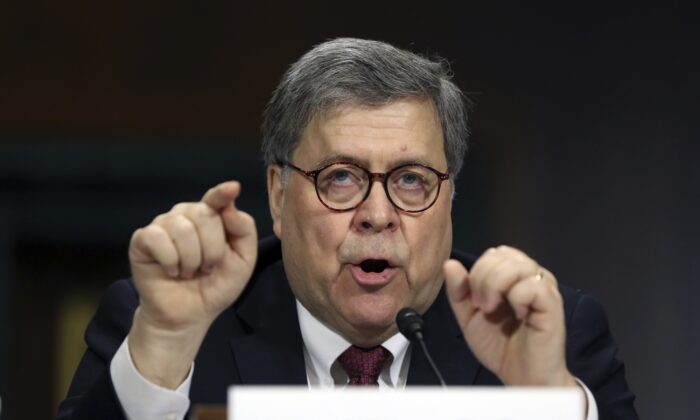 Time for the Hammer to Drop

Attorney General William Barr stated, when interviewed by CNN’s Wolf Blitzer on Sept. 2, that the Department of Justice would comply with its long-standing policies, and not bring criminal charges immediately prior to an election, in order to avoid influencing that election.

Now that the ballots have been cast, he’s no longer restrained by this policy.

Should he file criminal charges in the next few weeks, the repercussions will be historic and far-reaching. The Durham investigation is no doubt approaching the next phase, that of prosecution.

Such a plea is generally negotiated as an element of a cooperation agreement, in which a defendant actively assists prosecutors and investigators, either in obtaining new evidence and/or corroborating investigative results, then testifying before a grand jury and at trial on the government’s behalf.

In exchange, prosecutors agree to submit a recommendation of leniency at sentencing. The Clinesmith plea attests to the seriousness of the Durham investigation and provides an indication that it’s well-advanced.

Should Biden be sworn in as president and select Cabinet members, there’s little doubt that any criminal prosecutions initiated by the Barr Justice Department would be rapidly buried by a Biden-appointed attorney general, such as Obama “wingman” Eric Holder, or Loretta Lynch. Both AGs served in the Obama-Biden administration.

Lynch notoriously met with Bill Clinton in 2016 as their respective planes happened to cross paths on the tarmac of Phoenix airport. A meeting, whose content can only be surmised, occurred while Hillary Clinton was the subject of an investigation by Lynch’s department and the FBI.

Imagine, however, that in the immediate future, charges are filed against not only the anticipated subjects, such as former FBI Director James Comey, former CIA Director John Brennan, former DNI James Clapper, assorted subordinates and acolytes, et al., but against the Biden clan as well.

Charges could arise from the alleged influence-peddling as documented by the Senate Homeland Security and Finance committees and their staff. As reported by Jack Crowe in the National Review on Sept. 23, “the 87-page interim report is the product of a months-long probe in which members of the Senate reviewed more than 45,000 pages of Obama administration records and interviewed eight witnesses, many of whom are current or former U.S. officials.”

The report was initially ignored or ridiculed by The New York Times, Washington Post, CNN, MSNBC, and Democratic Party officials. The contents of the Hunter Biden laptop have been made public—and characterized by the same skeptics as Russian disinformation—as though the Russians would trouble to create thousands upon thousands of emails and photographs in order to diminish the electability of a candidate whose weakness on sanctions and support for the Joint Comprehensive Plan of Action (JCPOA, aka the Iran Nuclear Weapons Agreement) they would most likely find well-suited to their own foreign policy.

We now know that the FBI had in its possession the Hunter Biden laptop for more than a year. Was it lying fallow, or will it serve as one of the foundations of a Barr-Durham prosecution?

On Oct. 31, on the weekend prior to the election, protestors—truly peaceful protestors—brought a white horse to Barr’s home in suburban McLean, Virginia. The AG amiably chatted and posed for pictures. The message, presumably, is that the people are waiting for a white knight, riding a white horse, to save the day. And that day—if it is indeed to come—must come soon.

For the first time in the history of this country, a potential president-elect, awaiting possible inauguration, might have to engage a criminal defense attorney and respond to felony criminal charges.

It’s a golden opportunity for America to show to the world that here, in this constitutional republic, no one—absolutely no one—is “above the law,” as we heard ad nauseam over the past few years from Democratic legislators and mainstream media in their unceasing, baseless assaults on Trump.

Marc Ruskin, a 27-year veteran of the FBI, is a regular Epoch Times contributor and author of “The Pretender: My Life Undercover for the FBI.” He served on the legislative staff of U.S. Sen. Daniel Patrick Moynihan and as an assistant district attorney in Brooklyn, N.Y. Follow Marc on Twitter @mhruskin