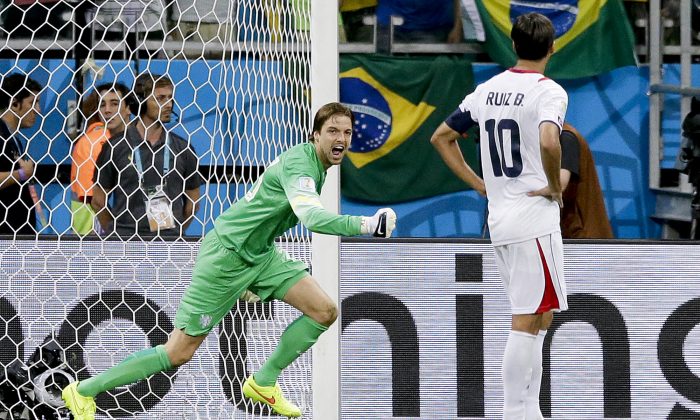 Netherlands' goalkeeper Tim Krul celebrates after saving a penalty from Costa Rica's Bryan Ruiz in a penalty shoot out during the World Cup quarterfinal soccer match between the Netherlands and Costa Rica at the Arena Fonte Nova in Salvador, Brazil, Saturday, July 5, 2014. (AP Photo/Matt Dunham)
Soccer

Tim Krul came in for the Netherlands in their World Cup match against Costa Rica on Saturday.

Krul subbed in just as overtime was ending because he’s considered a specialist in defending against penalty shots. The match went into a penalty shootout after both teams couldn’t score in either regular time or extra time.

The substitution ended up being a good one as Krul blocked a crucial shot, and his teammates delivered goals in their shots, leading to the Netherlands winning the shootout.

Krul blocked the second shot, putting the pressure on Costa Rica. Costa Rica also missed the fourth shot. The Netherlands made their first four shots. After the fourth make, it earned the win without needing to make the fifth one because it was already up two.

Before the quarterfinal match, the 26-year-old Krul had not played in this World Cup. Jasper Cillessen is the starting goalkeeper for the Netherlands.

The team will now go on to face Argentina in one of the semifinal matches.

The teams are slated to play on Wednesday.