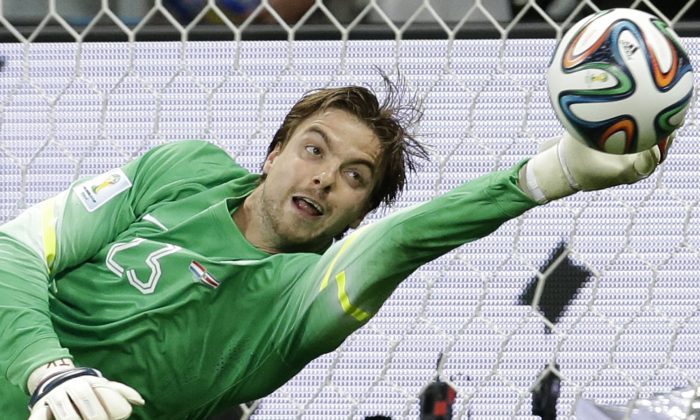 Netherlands' goalkeeper Tim Krul saves the last penalty kick during the World Cup quarterfinal soccer match between the Netherlands and Costa Rica at the Arena Fonte Nova in Salvador, Brazil, Saturday, July 5, 2014. The Ntherlands won 4-3 on penalty kicks. Late substitute Krul made two saves in a 4-3 penalty shootout victory over Costa Rica on Saturday to give the Netherlands a spot in the World Cup semifinals following a 0-0 draw.(AP Photo/Hassan Ammar)
Gaming

Tim Krul was the penalty shootout hero against Costa Rica on Saturday, but what is his career and gaming statistics like?

In the Netherlands-Costa Rica World Cup 2014 quarter final, the 26-year-old goalkeeper came on as a substitute in the 119th minute of play, went straight to the penalty shootout, and saved the spot kicks taken by Bryan Ruiz and Michael Umaña.

Otherwise, Krul has spent most of World Cup 2014 seating on the substitutes’ bench.

Career-wise, Krul joined Newcastle United in the 2006/2007 season, before going to Falkirk and Carlisle United on loan in next two seasons.

He returned to Newcastle in 2009 and is their current no. 1 goalkeeper.

According to WhoScored.com, Krul has made 124 appearances for the Toon Army, and has one assist to his name, and five yellow cards.

In EA Sports’ soccer simulator, FIFA 14, Tim Krul starts out Career mode with an overall rating of 79, and has a growth potential of 5, according to Futhead.com.