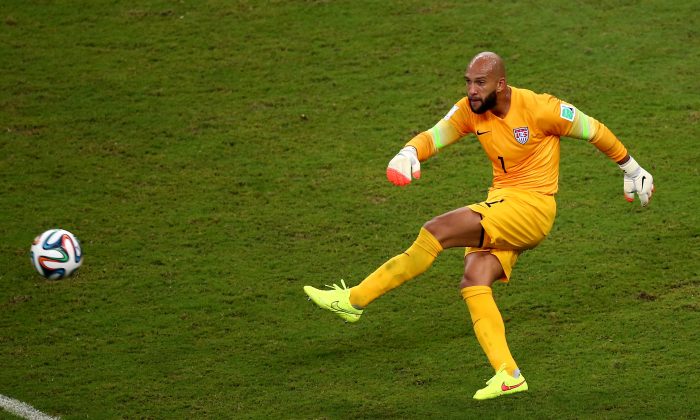 Goalkeeper Tim Howard of the United States in action during the 2014 FIFA World Cup Brazil Group G match between the United States and Portugal at Arena Amazonia on June 22, 2014 in Manaus, Brazil. (Elsa/Getty Images)
Sports

USA goalkeeper Tim Howard is an excellent shot stopper, but did you know that he can score a goal too?

The 35-year-old Everton and Team USA no. 1 launched a kick from inside his own penalty area to beat Bolton goalie Adam Bogdan on January 4, 2012.

Check out some of Tim Howard’s other saves for Everton here.

Howard has also had an excellent World Cup 2014, bailing USA out on several occasions. Most notably, Howard pulled off a World Cup record-breaking 16 saves against Belgium in a second round match.

Check out all 16 saves here.

WASHINGTON (AP) — President Barack Obama commended the U.S. soccer team Wednesday for making the country proud in the World Cup tournament in Brazil, during an Oval Office phone call with two of the team’s most celebrated players.

Obama called goalkeeper Tim Howard and team captain Clint Dempsey the day after the U.S. team was eliminated by Belgium. Praising Howard and Dempsey for their leadership and the team’s performance, Obama said this year was the first time the U.S. team had the entire nation truly focused on the contest.

“You guys did us proud,” Obama said in a video released by the White House. “To see the way you guys captured the hearts and the imaginations of the whole country is unbelievable.”

He joked that Howard, whose 16 saves captivated soccer fans worldwide, will have to shave his beard before returning to the U.S. to evade the mobs enthralled by his performance. He invited the team to return to the White House soon and asked Howard and Dempsey to convey his congratulations to their coach and teammates.

“I know it’s disappointing,” Obama said about the 2-1 loss to Belgium in overtime. “But what you guys accomplished is really, really significant.”

Obama has been following the World Cup closely. He watched last week’s U.S.-Germany match from Air Force One and chanted “I believe!” while watching the Belgium match Tuesday with White House aides.

Accolades for Howard have been pouring in from the highest level of government, including from Defense Secretary Chuck Hagel, whose Wikipedia entry was temporarily changed as a gag to show Howard as the new Pentagon chief. Rear Adm. John Kirby, a Pentagon spokesman, said Hagel invited the entire U.S. team to visit the Pentagon.

“He told Howard that with some training, he could someday become the real secretary of defense,” Kirby said.