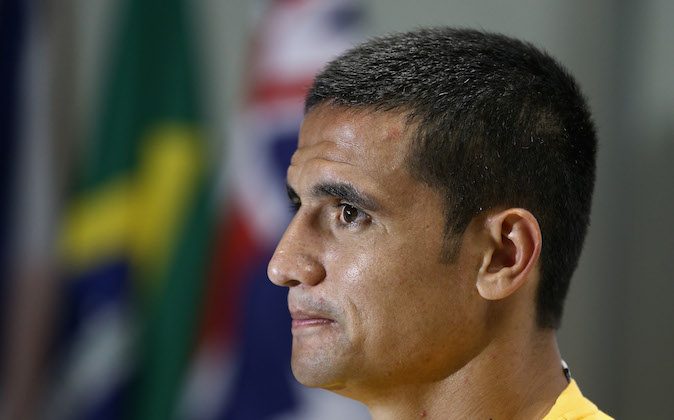 The vice-captain of the Australia team has been rather active on Twitter and Instagram in getting his fellow Aussies behind the national team.

On Twitter, Cahill has added a #CahillBrazil tag, and on Friday, the striker went on Instagram to express his gratitude for the support people have shown the Australia team.

“We prepare all our lives for days like today and I’m so proud to be part of a country and team that’s always willing to strive to be the best we can be. We want to thank everyone for the amazing support here in Brazil and back in Oz as well. On and off the pitch we stick together as a team and as a nation,” Cahill wrote.

Here is an Associated Press report on Tim Cahill.

Australia Looks to Cahill for Goals in World Cup

CUIABA, Brazil (AP) — With his trademark shadow-boxing routine at the corner flag, Australia forward Tim Cahill may provide one of the iconic goal celebrations at this World Cup.

And if anyone is going to score in Brazil for the tournament’s lowest-ranked team, it’s most likely going to be Cahill.

But therein lies the problem for the Socceroos, who are heading into a third straight World Cup with their chances having been written off before a ball has been kicked.

A reliance for goals on a 34-year-old in the twilight of a career spent mostly playing as a midfielder exposes the dearth of forward options for coach Ange Postecoglou in Brazil.

The only other out-and-out striker in the squad is 21-year-old Adam Taggart, who has just four international caps and is playing abroad for the first time.

That lack of a cutting edge is the main reason why Australia has been given little hope in a Group B that contains heavyweights Spain and the Netherlands, as well as first-up opponent Chile on Friday.

“We certainly believe we can be a threat in other areas,” Postecoglou said after a training session in the stifling humidity in western city Cuiaba on Thursday, when asked about Australia’s weakness up front, “but with Timmy, if he does get half a chance in the box, particularly in the air, he can hurt any opposition.

“I’m not worried. If he keeps scoring, I’m going to be happy.”

And no one has scored more goals for the Socceroos than Cahill, whose total has risen to 32 after playing up front for the national team for the past four or five years.

It is a role he sometimes reprised for Everton in his eight years in the English Premier League from 2004-12, with his prodigious spring and the timing of his runs into the penalty area his hallmarks.

In his first full season with MLS side New York Red Bulls in the United States, Cahill was the team’s top scorer with 11 goals in 2013.

“Chile, Holland or Spain, I pretty much know they are not going to be happy to play against me,” Cahill said this week, “because I am going to make it the most difficult 90 minutes, or whatever time I get to play.”

Cahill will have experience behind him in captain Mile Jedinak, the holding midfielder for Premier League team Crystal Palace, and Mark Bresciano, playing in his third World Cup.

But the majority of the team will be sprinkled with youth as Postecoglou bloods a new generation with next year’s Asian Cup at home and the 2018 World Cup in mind.

“If you look at the rankings and where we are (No. 62), people see us as outsiders. But that’s OK. We are ready for it.”

An estimated 15,000 Australians have flown to Brazil to cheer on the team, the country’s biggest following at a World Cup.