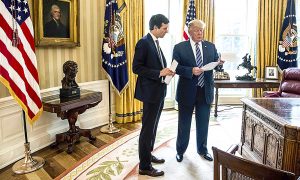 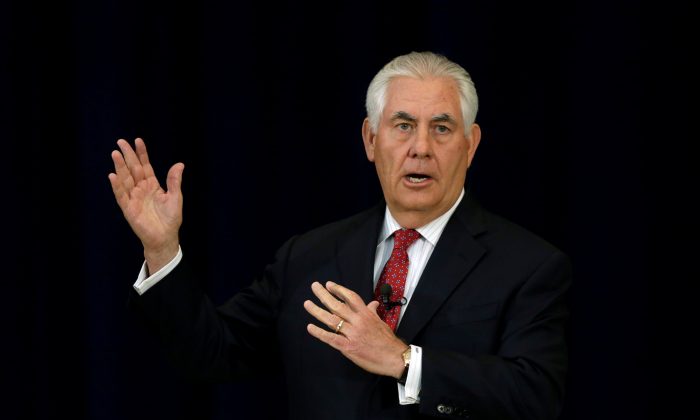 Secretary of State Rex Tillerson delivers remarks to the employees at the State Department in Washington on May 3, 2017. (REUTERS/Yuri Gripas)
US

WASHINGTON—Secretary of State Rex Tillerson on Wednesday outlined for Department employees how an “America First” agenda translates into foreign policy, but did not address the Trump administration’s proposed budget cuts, which worry many diplomats.

It was the first time Tillerson had addressed all employees since his first day on the job on Feb. 2, when he spoke to hundreds of State Department officials in the building’s lobby.

Some allies and even some U.S. officials have interpreted Republican President Donald Trump’s “America First” agenda, which puts Americans’ interests at home ahead of those of its partners overseas, as a threat to retreat from the world.

In the most thorough explanation yet of the Trump administration’s foreign policy views, Tillerson said U.S. foreign policy priorities had gotten “a little bit out of balance” in the previous decades.

“These are really important relationships to us, they’re really important alliances, but we’ve got to bring them back into balance,” he said, speaking without notes and walking around the stage in the State Department auditorium.

For instance, he said, the Trump administration is putting more pressure on NATO members to spend more on defense and trying to cut better deals with U.S. trading partners.

He also signaled that the United States would de-emphasize human rights concerns in some of its interactions with other countries.

That remark drew criticism from some diplomats. One longtime department official, who requested anonymity to speak frankly, said that any move to demote human rights and democracy would risk the foundation of U.S. leadership in the world.

Tillerson took a tour of U.S. priorities around the world, including in East Asia, Russia, Africa, and the Western Hemisphere, omitting Europe. He spoke for nearly 40 minutes.

With regard to North Korea, Tillerson said the administration would be willing to use so-called secondary sanctions to target foreign companies that continue to do business with Pyongyang in contravention of United Nations sanctions.

On China, Tillerson said the United States has a “tremendous opportunity” to define its relationship with the superpower for the next several decades, and that he sensed great interest by the Chinese leadership to do that as well.

In addition to North Korea, the Chinese regime and the United States have differing approaches or even conflicting interests in the South China Sea, over trade issues, cyber security and others.

Tillerson said he had told Russian President Vladimir Putin during his visit to Moscow last month that U.S.-Russia relations were at their lowest point since the Cold War.

“He did not disagree,” Tillerson said. “He shrugged his shoulders and nodded in agreement.”

A working group led by Acting Deputy Secretary of State Tom Shannon is attempting to address issues “irritating” the U.S.-Russia relationship, said Tillerson, who is set to meet Russian Foreign Minister Sergei Lavrov this month in Alaska. Trump and Putin spoke by phone on Tuesday.

“We’ve got a long list of things to work on, from our arms agreements … to obviously getting to Ukraine, Crimea, and other places where Russia’s not being particularly helpful today,” Tillerson said.

But in remarks stretching to nearly 40 minutes, he did not address the administration’s proposed 28 percent budget cut for U.S. diplomacy and foreign aid, which would reduce funding for the United Nations, climate change and cultural exchange programs.

The Trump administration also has not named candidates for the vast majority of State Department positions requiring Senate confirmation, and many are being filled by career diplomats in “acting” positions. Tillerson began his remarks by thanking those officials, to applause from the crowd. Current and former diplomats say the acting officials do not feel empowered to make crucial choices or enact major changes in policy.

Tillerson’s remarks followed an invitation to State Department and U.S. Agency for International Development employees this week to participate in a survey to help identify “efficiency improvements,” in line with a March directive from Trump to “reorganize governmental functions and eliminate unnecessary agencies.”

He said he recognized that deep change to the State Department “is really stressful for a lot of people. There’s nothing easy about it,” and said the administration has “no preconceived notions on the outcome” of a review of how to reform the agency.

Said another veteran diplomat, who also requested anonymity, “It appeared that his intention was to inform us that our mission has changed from what it has been since 1945. It was clear that he came to talk, and not to listen.”