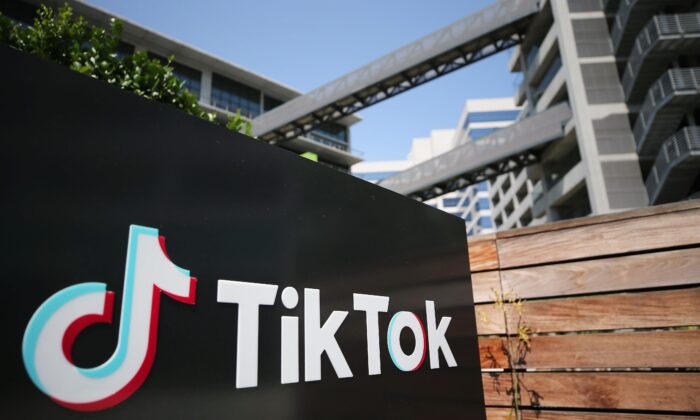 The TikTok logo is displayed outside a TikTok office on August 27, 2020, in Culver City, Calif.. (Mario Tama/Getty Images)
By Lorenzo Puertas

If you use the video-sharing platform TikTok, you may be feeding information to Chinese Communist Party (CCP) intelligence services, warns Casey Fleming, a cyber security expert and CEO of strategic advisory firm BlackOps Partners.

In a recent interview with Epoch TV’s “Wide Angle” program, Fleming explained the dangers posed by foreign-controlled cellphone applications such as TikTok, which is owned by Beijing-based internet giant ByteDance.

TikTok, the hugely popular short-format video app that allows users to create, share, and view 15-second videos often featuring singing, dancing, or comedy, was started in China as “Douyin” in September 2016; within a year, it had 100 million Chinese users.

The app was relaunched as TikTok internationally in September 2017. Attracting dozens of A-list celebrity users, and partnerships with the NBA, NFL, and Comedy Central, TikTok quickly became one of the most popular apps in the world.

But TikTok may have a dark side. Since TikTok is a Chinese company, all the private information that the app is collecting may be fed directly to the Chinese regime, experts have warned, citing a range of Chinese laws that compel companies to cooperate with regime authorities when asked.

“All of your data on that phone,” Fleming said, “everything you do, and everything that you have stored on your phone is being sent out of the country, possibly to be used against you.

Awareness of this threat isn’t new. In August 2020, President Donald Trump signed an executive order to ban all TikTok activity in the United States within 45 days if it wasn’t sold by ByteDance. Trump signed a similar order against the Chinese-owned WeChat messaging app.

Since then, Trump’s orders have been stalled by several lawsuits and court orders. In addition, the Biden administration canceled the orders in June 2021, instead directing the Commerce Department to evaluate the platform to determine whether it poses a national security risk.

Now the U.S. government appears to be taking new steps to address the security risks posed by TikTok and other foreign apps, including a proposal to expand federal oversight of foreign-controlled apps. Under the proposed new rules, the Commerce secretary would be empowered to restrict Americans’ access to foreign apps that are considered security threats.

But it may be too little, too late, according to some experts, including Mark Grabowski, an associate professor specializing in cyber law at Adelphi University and author of the new book “Cyber Law and Ethics.”

“It is stunning that it’s taken so long for the Biden administration to conclude TikTok is a national security threat,” he told the Epoch Times. “President Trump tried to address this problem, but unfortunately, Biden was determined to immediately reverse everything Trump did—whether it made sense or not.”

“TikTok will go down as the most successful data harvesting of Americans ever done by a foreign adversary,” he said. “TikTok is Chinese government malware masquerading as a social media app.”

“TikTok is a surveillance apparatus for Beijing,” he told The Atlantic in 2020. “It is a Trojan horse on people’s phones.”

The danger comes from the enormous amounts of personal data that TikTok is gathering from each user, Grabowski said.

“It can access your camera, microphone, saved photos and videos, contacts, GPS location, and probably also your web browsing history,” he said. “The app collects way more data than it needs to. For example, TikTok does GPS tracking—even though TikTok videos never display any location information.”

This data isn’t just collected on your phone—it’s passed on to TikTok’s owners in China, Grabowski said.

“All the data collected by the app is encrypted in a way that makes it impossible to know exactly what is being sent back to China.”

In August 2020, The Wall Street Journal reported that TikTok tracked Android user data in violation of Google’s policies. In June 2021, TikTok expanded its privacy policy to get users to agree to share biometric data including faceprints and voiceprints, and a month later, a CNBC investigation revealed that ByteDance employees have direct access to U.S. TikTok user data.

“We know that TikTok’s Chinese parent company has access to every American user’s data,” said Grabowski. “They can search that data by specific IDs, locations, and various other queries.”

TikTok has said repeatedly that it doesn’t share U.S. user data with the Chinese regime, and that its data is held on servers in the United States with backup servers in Singapore, not China.

But Grabowski isn’t buying it.

“This data can and will be shared with the CCP,” he said.

“If the Chinese government tells a Chinese company to hand over its data, they’re going to do it. China’s National Intelligence Law requires Chinese organizations and citizens to cooperate with the state intelligence work.”

But why would the CCP want U.S. cellphone data?  BlackOps CEO Fleming says it’s all about control.

“China is a totalitarian state, completely controlled by the CCP,” he said. “If you are a Chinese citizen, your government runs your whole life. Even when you travel overseas, you have to check in and let them know when you are going, where you are going, and what you’ll be doing. And they’ll let you know when they want you to check in again, and what they want you to do.

“Every Chinese traveler is considered an asset by the CCP.”

With Chinese apps installed on over a billion phones around the world, the CCP may have effectively turned foreign TikTok users into unwitting Chinese intelligence assets.

“Data is the key to this control,” said Fleming.

Grabowski agreed, saying, “The Chinese government could use TikTok to spread propaganda to Americans, or to blackmail users who regret what they posted.”

The data can also help the Chinese regime find dissenters, political activists, and other enemies of the CCP, he added.

“People are extremely naive if they think TikTok is playing nice,” he said. “They have a long history of documented privacy intrusions.”

For instance, TikTok paid a $5.7 million fine to the Federal Trade Commission in February 2019 for illegally collecting data on children. It also settled a class-action lawsuit by paying $92 million in February 2021; the lawsuit alleged that the platform harvested and shared personal information without users’ consent.

TikTok didn’t return a request by The Epoch Times for comment by press time.

For Fleming, the stakes are high.

“We have to understand, as a free nation, what we are facing. We are facing a world war all over again. An alliance of China, Russia, Iran, and North Korea against the free world. Americans need to become more aware,” he said, “and open their eyes to what is happening.

“We have to do everything we can to protect our data and our intellectual property. Do not give away your data. Always opt out. And get Chinese apps off your phones and computers.”