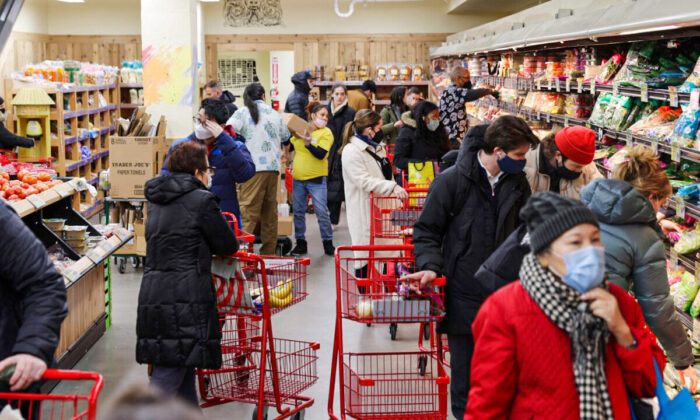 The labor market continues to favor workers, with other data on Tuesday showing job openings hovering near record highs in February. Tightening labor market conditions are boosting wages, providing some cushion against inflation. Consumers’ one-year inflation expectations shot up to an all-time high of 7.9 percent.

“A strong job market is helping households shoulder the worsening burden of rising prices,” said Tim Quinlan, a senior economist at Wells Fargo in Charlotte. “One of the few things still supportive of consumer confidence is the fact that the labor market remains exceptionally tight.”

The Conference Board said its consumer confidence index rose to a reading of 107.2 this month from a downwardly revised 105.7 in February. Economists polled by Reuters had forecast the index falling to 107.0 from February’s initially reported 110.5.

The improvement in confidence followed the rolling back of COVID-19 restrictions across the country, and was despite gasoline prices remaining above $4.00 per gallon as Russia’s war against Ukraine rages on.

Unlike the University of Michigan’s consumer sentiment index, which fell to an 11-year low in March, the Conference Board survey puts more emphasis on the labor market.

The Conference Board’s so-called labor market differential, derived from data on respondents’ views on whether jobs are plentiful or hard to get, increased to a record high 47.4 this month from a reading of 41.5 in February.

This measure correlates to the unemployment rate from the Labor Department. The jobless rate was at a two-year low of 3.8 percent in February.

Consumers’ upbeat views of the labor market were underscored by the Labor Department’s Job Openings and Labor Turnover Survey, or JOLTS report showing job openings, a measure of labor demand, fell 17,000 to 11.266 million on the last day of February. Despite the second straight monthly decline, job openings were not too far from a record high of 11.448 million set in December. Economists had forecast 11 million vacancies.

Job openings in the finance and insurance sector fell by 63,000 and decreased 39,000 in the nondurable goods manufacturing industry. But vacancies rose by 32,000 in the arts, entertainment and recreation sector, while education services reported 26,000 additional openings.

The job openings rate was unchanged at 7.0 percent. Hiring increased 263,000 to 6.689 million, led by construction, but fell in the information sector. The hires rate climbed to 4.4 percent from 4.3 percent in January.

The jobs-workers gap is now at 3.0 percent of the labor force, which economists at Goldman Sachs said “suggests strong wage growth will persist until improvements in labor supply and normalization of job openings bring the labor market back into balance.” There were a record 1.8 open jobs per unemployed person in February.

More people voluntarily quit their jobs, pushing the total to 4.352 million from 4.258 million in January, another sign of labor market confidence. About 74,000 retail workers quit, while durable goods manufacturing saw 22,000 resignations. The quits rate rose to 2.9 percent from 2.8 percent in January.

U.S. stocks were trading higher amid signs of progress in peace talks between Russia and Ukraine. The dollar slipped against a basket of currencies. The widely tracked U.S. two-year/10-year Treasury yield curve inched closer to inversion, a signpost of recession, as traders bet that aggressive policy tightening by the Fed could hurt the economy over the longer term.

Consumers’ inflation expectations over the next 12 months accelerated to 7.9 percent, the highest since the series started in 1987, from 7.1 percent in February. With inflation expectations surging, fewer consumers planned to buy cars over the next six months. But intentions to buy big-ticket items like refrigerators and washing machines increased.

The 30-year fixed mortgage rate is well above 4 percent. The Fed this month increased its policy interest rate by 25 basis points, the first hike in more than three years. Fed Chair Jerome Powell has said the U.S. central bank must move “expeditiously” to raise rates and possibly “more aggressively” to keep high inflation from becoming entrenched.

House prices continue to march higher as builders struggle to bridge the supply gap because of shortages and higher prices for inputs like softwood lumber for framing, as well as cabinets, garage doors, countertops and appliances.

Strong house price inflation was reinforced by a fourth report from the Federal Housing Finance Agency showing home prices accelerated 18.2 percent in the 12 months through January after advancing 17.7 percent in December. Annual price growth in excess of 20 percent was recorded in the Mountain, Pacific, South Atlantic and East South Central regions.

“We expect house prices will continue on their upward trajectory in coming quarters, although growth will slow from its rapid pace experienced over the past year and a half,” said Brent Campbell, an economist at Moody’s Analytics in West Chester, Pennsylvania.