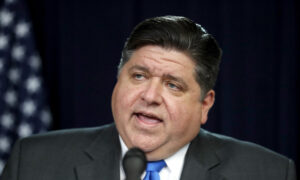 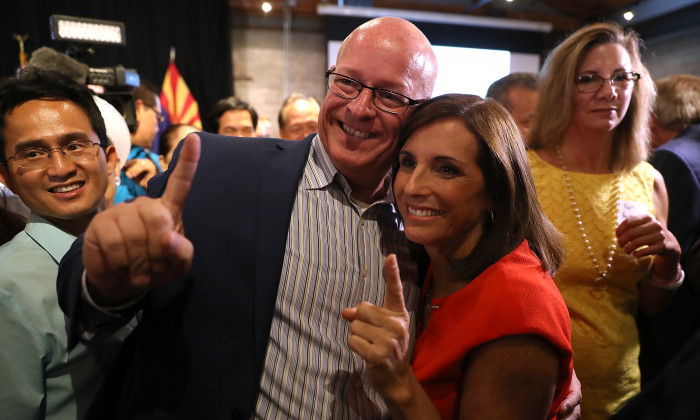 Senate candidate U.S. Rep. Martha McSally (R-AZ) takes a photo with a supporter during her primary election night gathering at Culinary Drop Out at The Yard on August 28, 2018 in Tempe, Arizona. (Justin Sullivan/Getty Images)
US

PHOENIX–For most of this year, Democratic U.S. Senate candidate Kyrsten Sinema of Arizona has run what has been viewed widely as one of the best races in the nation. But with less than a month to go to Election Day, there are doubts whether she can make it across the finish line.

Her matchup with Republican Martha McSally appears to be tightening at the same time that some voters are casting their ballots with the start of early voting in the state. That is unwelcome news for Democrats, who just weeks ago believed they had a chance to gain more than the two seats they need to take control of the Senate.

Since the battle over the Oct. 6 confirmation of Supreme Court Justice Brett Kavanaugh, the national picture seems to have shifted. Republicans have taken an upper hand in states such as Tennessee and Texas—and have stayed competitive in places like Florida and Indiana.

That makes Arizona and neighboring Nevada the best hopes for Democrats to flip seats held by Republicans. Republicans are looking to maintain majority in the House and Senate. Should Democrats take either chamber, much of Trump’s agenda would be thwarted and his administration would be subject to greater oversight.

The odds, however, have always been against Sinema, a member of the House who is seeking to replace retiring Republican Jeff Flake. Arizona has long been a right-leaning state which has not elected a Democrat to the Senate in 30 years.

Sinema has billed herself as an independent voice while courting the moderates she needs to win, even as some left-wing progressives have groused that she has been too cautious.

She stayed quiet for much of the Kavanaugh fight, only opposing his confirmation at the very end. She has backed the efforts of the U.S. Immigration and Customs Enforcement agency, amid calls from some in her party for its abolishment. Asked last week about supporting “Medicare For All,” a universal health care policy favored by many Democrats this election season, she said she wants more practical solutions.

Much was made locally about Sinema’s choice to not endorse the Democratic candidate for Arizona governor, David Garcia, a progressive. She has not appeared at events with Garcia and other members of the Arizona congressional delegation.

Sinema’s candidacy stands in marked contrast to that of Representative Beto O’Rourke in conservative Texas, the Democrat who is running against incumbent Republican Senator Ted Cruz unabashedly as a left-wing progressive.

Sinema seems now to be in a better position than O’Rourke to win her race while receiving much less national attention.

“She has run the best Democratic campaign that I have seen here for a long time,” said Chad Campbell, a Phoenix-based Democratic strategist.

That has made her a top target of well-funded conservative advocacy groups who have bombarded the airwaves in an attempt to stop Sinema and boost McSally. Campbell conceded that the ads “have chipped away at her lead.”

Many of the ads have a common theme: Sinema has misrepresented herself; she is a stealth liberal disguising herself as a moderate.

Sinema began her political career in Arizona as a member of the Green Party, but joined a moderate Democratic caucus when elected to the House in 2012.

McSally’s campaign has turned to high-powered surrogates for help. On Friday, former Republican presidential nominee Mitt Romney, a candidate for the Senate from Utah, appeared with her at a rally in the town of Gilbert. Trump will hold a campaign event this Friday for McSally in Mesa, a Phoenix suburb.

“We are literally in a dead heat right now for this Senate seat and this Senate majority,” McSally told the crowd while blasting Sinema as unpatriotic.

Tim Bushnell, 60, of Fountain Hills, Arizona, who attended the rally, said he could not vote for Sinema. “Her history is pretty radical-left,” he said.

If Sinema prevails, she will be able to argue that her moderate strategy may be the best way for Democrats to defeat Donald Trump in 2020. If she loses, any hope her party has of taking the Senate likely will fade with her.