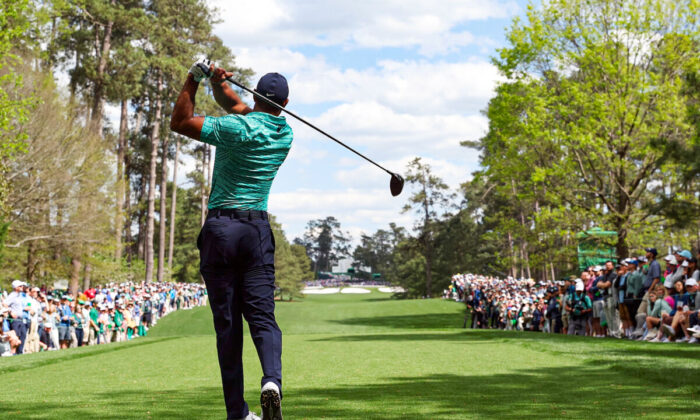 Tiger Woods plays his shot from the seventh tee during the second round of The Masters at Augusta National Golf Club, in Augusta, Ga., on April 8, 2022. (Gregory Shamus/Getty Images)
Golf

Tiger Woods usually makes the top headlines in golf, as exemplified by the crowds at the first major of the year at the 86th Masters. Woods remarkably made the cut, while Scottie Scheffler took a commanding 5-stroke lead at 8-under par on Friday.

Woods surprised the golfing world by playing in the tournament after recovering from a near-fatal auto accident over 500 days ago, where he nearly lost his right leg. Woods stated that he has rehabbed every day, enabling him to play.

The initial doubt was his ability to walk the golf courses, as the recently inducted World Golf Hall of Fame inductee had downplayed his ability to return to play the PGA tour this year.

“I am proud of the fact that my whole team got me into this position,” said the 46-year-old Woods. “We worked hard to get me here to where I have an opportunity, and then not to have any setbacks this week. We have kept progressing.”

Woods described the crowd and atmosphere as “electric,” beginning the tournament with a round of 1-under 71, and was four strokes behind first round leader Sungjae Im, who shot a score of 67.

The second round, in cool conditions with typical blustering winds, began tumultuously for Woods with four bogeys in the first five holes. He would recover with birdies on holes #8, #10, #13, and #14, along with bogeys on #11 and #12, finishing with a 74, a 1-over par total to make the cut.

“Along the way, I kept getting my feels and hitting shots,” added Woods. “I was able to practice and get my touch. Practice on my short game, hit a lot of putts, which was great. Start seeing break again … and got my [putting] eye back.”

Scottie Scheffler took a commanding lead on Friday, seeking his first major victory, following a first round of 3-under, followed by a second round 5-under to take a five-stroke 36-hole lead at –8.

After his arrival on the PGA tour, and making the Ryder Cup Team in 2021, Scheffler has been remarkable, winning three of five tournament starts. Scheffler’s success may likely be attributed to his new caddie, Ted Scott, who worked the bag for Bubba Watson in his two Masters victories.

On Feb. 13, 2022, Scheffler won his maiden PGA tournament at the WM Phoenix Open in a playoff against Patrick Cantlay. Three weeks later, he would win his second title at the Arnold Palmer Invitational; and three weeks later, won the WGC-Dell Technologies Match Play, which moved him to No. 1 in the official World Golf Ranking.

“If anything, [the lead] gives me more confidence,” said the 25-year-old Scheffler. “Once I saw that I took the lead at one point and my first thought was to just keep trying to build it just because I feel like I’m playing well. As long as I’m committed to everything, everything should be fine. The rest really is up to me.”

Other contenders are defending champion Hideki Matsuyama, first round leader Im, Shane Lowry, and former champion Charl Schwartzel, all tied for second at –3.

Former champion Dustin Johnson is tied for sixth along with Kevin Na, and Harold Varner III at –2.

Third and fourth round television coverage is shown on ESPN Plus, CBS, and The Golf Channel.

Rolex World ranked No. 2, Nelly Korda, announced on social media Friday that she recently underwent successful surgery for a blood clot in her left arm.

Korda, 23 years old, was diagnosed with the blood clot in mid-March after she experienced swelling following a workout in Ponte Vedra Beach, Florida.

“I recently underwent surgery for a blood clot in my subclavian vein,” said Korda on social media accounts. “I am pleased to report the procedure went well and the doctors were happy with the outcome. I am now home recovering and preparing to start rehab. I am looking forward to getting back to 100% so I can begin practicing.”

Korda was ranked No. 1 in the world late in 2021 following four wins on the LPGA tour; among them was a major at the KPMG Women’s PGA Championship and the gold medal at the Tokyo Olympics.

“It wasn’t the start of the year I had hoped for, to say the least,” said Korda. “2022 began with me getting COVID-19 the second week of January, which kept me off my feet for some time before the beginning of the LPGA season. Then followed up with a blood clot.”

Korda displayed three pictures along with her announcement on various social media accounts. The first was from the hospital bed, another was from home with her arm wrapped, and the last seems to be from the recent Miami Open tennis tournament, where her 21-year-old brother, Sebastian Korda, competed.

Korda’s older sister, Jessica Korda, is ranked 15th in the world, and finished second in the LPGA’s first major of the year at The Chevron Championship.