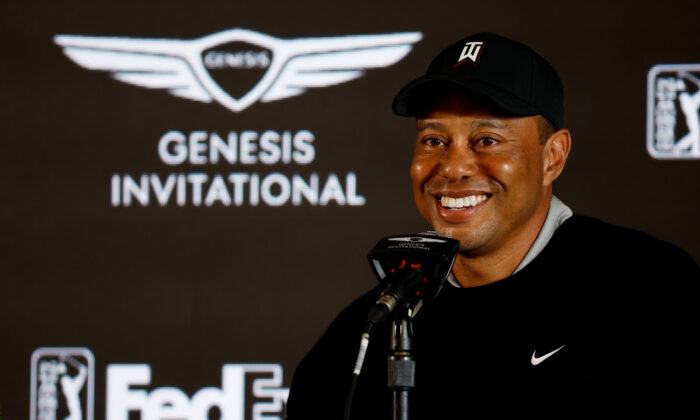 Tiger Woods of the United States speaks to the media during a press conference prior to The Genesis Invitational at Riviera Country Club, in Pacific Palisades, Calif., on Feb. 16, 2022. (Cliff Hawkins/Getty Images)
US News

Tiger Woods gave an update of his current state of recovery and the possibility of returning to play on the PGA tour during a press conference as the long-time host of the Genesis Invitational at Riviera Country Club in Pacific Palisades, California, on Feb. 16.

“I can walk on a treadmill all day. It’s easy,” Woods said. “It’s just straight and there’s no bumps in the road. But walking on the golf course with undulations, I have a long way to go.”

The 15-time major winner, Woods stated that his long road to recovery has been “tough,” following a car accident a year ago on the morning of Feb. 23, 2021, following the very same Genesis Invitational.

Woods was driving alone when his a sponsor-provided vehicle rolled over on Hawthorne Blvd. in Rancho Palos Verdes.

Woods had no recollection of the accident due to head trauma and broke bones in both legs, including a compound fracture that was in question of possible amputation.

Woods was raised with religious faith and had previously stated, “Buddhism teaches me to stop following every impulse and to learn restraint. Obviously, I lost track of what I was taught.”

“But I’ve gotten here, I’ve gotten this far,” he added. “Man, I still have a long way to go. Each and every day is a fight.”

Woods said at the Riviera Country Club he had been desperate to rehabilitate to be able to play with his 12 year-old son, Charlie, for the PNC Championship by December 2021.

The duo did play and finished second behind John Daly and his son.

The ecstatic Woods said of the championship, “We had the best time ever,” although he wished had been able to walk the fairways side-by-side with Charlie; Woods was given the privilege of using a cart to navigate the course.

The 46-year-old Woods added that he is improving, but not at the pace he was hoping for, due to the “age factor … which is frustrating. I want to be at a certain place but I’m not. And I just got to continue working.”

Arguably the greatest golfer in history, Woods concluded that he plans to play certain events, majors and others.

“But on a full time level, that will never happen again,” he said.