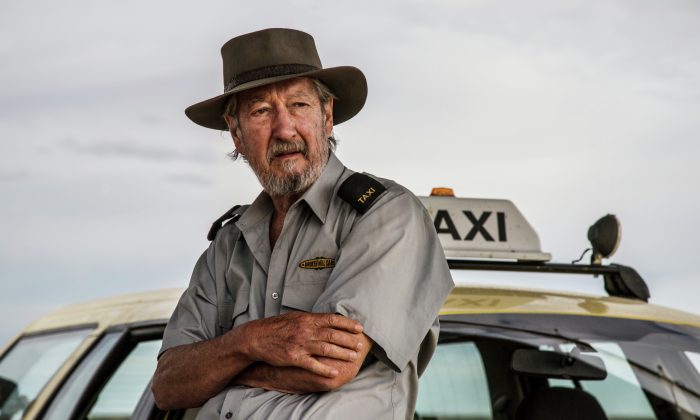 Michael Caton as Rex in "Last Cab to Darwin," a drama/comedy about a 70-year-old taxi driver with terminal cancer who drives across the Australian outback to Darwin seeking to die on his own terms. (Courtesy of TIFF)
Entertainment

TORONTO—You can see a lot of weird movies at the Toronto International Film Festival, movies without plot or sympathetic characters, or ones that mix beautiful cinematography with scenes so bizarre and disgusting they violate common decency.

And let’s be honest, as out of vogue as it is, common decency is something modern cinema, and society at large, could use more of—which is what makes “Last Cab to Darwin” such a special and rare treat.

“Last Cab” has all the things a great movie should have, including compelling characters you can feel okay caring about and a plot that moves along briskly while leaving moments for symbolism and artistry. Add to that a narrative arc that takes you on an emotional journey, a sincere and nuanced perspective on important issues of the day, and a triumphant climax that affirms human goodness.

That last bit might seem a little hokey to some, a little simple perhaps for the cynics. Often, movies celebrate villains but do little to temper that celebration beyond reminding us that these bad people eventually went to jail for their crimes. That’s the plot for two of TIFF’s biggest films this year, real crime stories “Legend” (starring Tom Hardy) and “Black Mass” (starring Johnny Depp).

“Last Cab to Darwin” never even veers in that direction; it takes regular people facing extraordinary situations and grants them the grace we’d hope to have ourselves.

The story revolves around Rex (Michael Caton), a 70-year-old taxi driver who’s never left Broken Hill, a small mining town of some 18,000, distinct for being one of the largest centres in Australia’s vast and dry interior region known as the Outback.

Rex is a warm and endearing fellow with an aboriginal girlfriend, Polly (Ningali Lawford-Wolf), who he keeps somewhat of a secret because of the racism that pervades his town, including at the pub where his buddies hang out and aborigines aren’t welcome.

It’s a masterfully written and expertly directed film that shows due care for what would be left in the hearts and minds of those who see it.

Rex is getting along pretty well, having tea with Polly in the morning, driving his regulars, having beers with the guys at the pub, and maybe a couple more with Polly later that night. Problem is, he has a stomach full of cancer.

There’s nothing that can be done about it and Rex doesn’t want to rot away in a hospital. That’s when he hears about a new law that allows euthanasia in a state on the other side of the country in the northern coastal city of Darwin, some 3,000 kilometres away.

Waiting patiently there is one Dr. Farmer (Jacki Weaver), an eager euthanasiast hungry for publicity, hoping to make Rex the first man in Australia put out of his misery with the help of a machine she demonstrates cheerfully on a morning talk show.

What unfolds is a beautifully written and richly heartwarming story about a man willing to trade life for an easy death and the people whose lives he changes along the way.

This isn’t a heavy-handed opinion on euthanasia, though the film steers towards the life-affirming and reveals the precious moments that can unfold at the end of a painful life. Nor is it a story weighed down by some of the heavy issues it raises, like racism.

It’s a masterfully written (Reg Cribb, Jeremy Sims) and expertly directed (Jeremy Sims) film that shows due care for what would be left in the hearts and minds of those who see it.

“Last Cab to Darwin” accelerates toward a triumphant climax as golden as an Australian sunset, a sight anyone would be lucky to see.