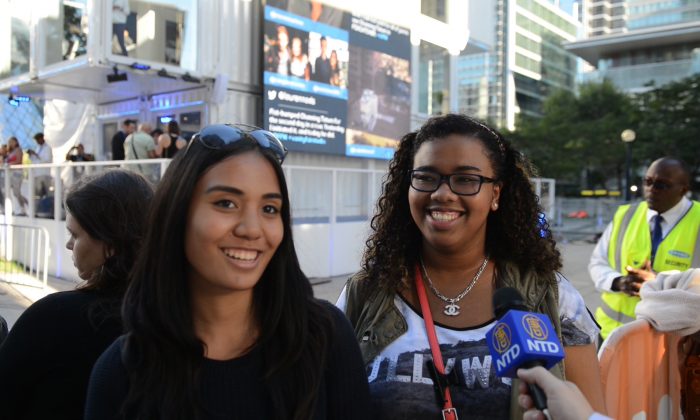 Superfans Katrina Sison and Rebecca Jones waited four hours to see Channing Tatum when he arrived for the TIFF premiere of "Foxcatcher" at the Roy Thomson Hall in Toronto on Monday, Sept. 8, 2014. (Matthew Little/Epoch Times)
Entertainment

TIFF Draws Thousands of Stargazers and a Rarer Breed of Superfan

TORONTO—Crammed up against the iron gate, they scream, call, and beg for a bit of attention.

Hours before the stars arrive, they are waiting. They bring the energy and excitement that makes “celebrity” mean something, but superfans rarely get any credit for their sacrifice. Many people wonder if they’re mentally sound.

They are the front line of the howling masses. If you hear them up close, they can sound desperate and crazed. At the red carpet premiere for “Foxcatcher” on Sept. 8, the smallest glimpse of Channing Tatum was enough to set off waves of shrieks and squeals.

Some had been at the Roy Thomson Hall all day. By dusk, Tatum had already gone inside for the premiere of the film, unlikely to be seen again, but the fans waited anyway.

Rebecca Jones and Katrina Sison waited a relatively brief four hours to see the star. They caught a glimpse of his head and elbows, said Sison.

“It’s like taking that step from on screen to actually in person. It makes everything that they do seem more real to you,” she said.

Why Tatum in particular?

Tatum’s fans were legion at the red carpet premiere of “Foxcatcher,” a biopic in which he plays an Olympic wrestler alongside Steve Carell and Mark Ruffalo.

Across the street at the Princess of Wales Theatre, Andrew Garfield attended the premiere of “99 Homes,” a drama about a shady realtor cashing in during the U.S. housing meltdown of the last decade. His superfan crowd was smaller, but just as passionate.

One fan said it was the actor’s turn as “The Amazing Spider-Man” that sealed the deal.

“We are willing to wait for 10 hours for him,” said the college student who missed classes that day.

When Garfield eventually arrived, she admitted there would be hysterical screaming coming from somewhere in her immediate vicinity.

There’s a slight difference between a fan and a superfan. Regular fans fill out the mass of people who line the metal crowd control fences that are installed in front of theatres hosting red carpet events.

Superfans are at the front. They get there five, ten, twelve hours early to guarantee they’ll be pressed right up against the fence. They bring stools and lawn chairs or just sit on the pavement hours on end, DVDs in hand, posters at the ready.

Superfans are more likely get the autographs and selfies, a nod from the star they came to see, even a small conversation.

Average fans are more likely to get a blurry photo of the top of Dustin Hoffman’s head.