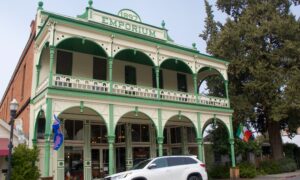 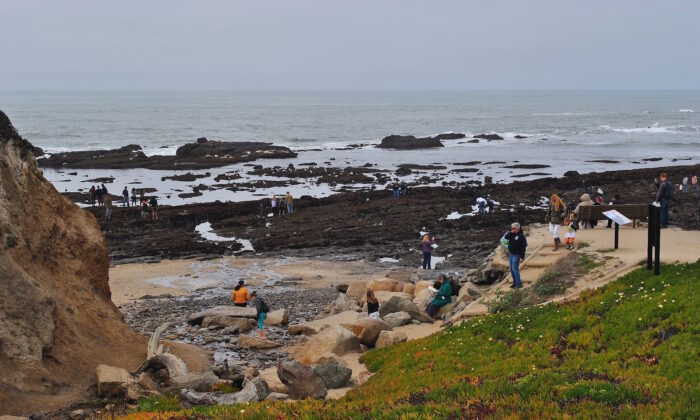 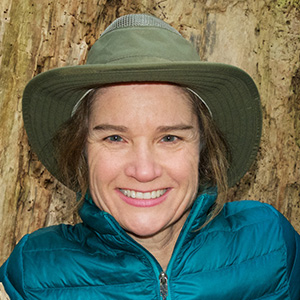 If you long to escape your surroundings, enter another world, and observe strange little creatures, the Fitzgerald Marine Reserve in San Mateo County, California, can’t be beat.

Recently, I proposed an early morning day trip to the tide pools, and to my joy, my teenagers consented to go along. You have to go when the tide is low—one foot or less. This leaves about an hour on either end of the optimal time to explore the pools and view the tiny creatures within.

Don’t bother going when the tide is high; it covers all the rocks and leaves hardly a strip of beach. Consult the Half Moon Bay tide forecast table to plan your trip.

We saw lots of sea anemones, snails, hermit crabs, small fish, and occasional chitons. Unfortunately, we didn’t see any starfish. They are still recovering from the sea star wasting disease that began in 2013, devastating the population all along the coast from Alaska and Canada to Mexico.

Scientists still don’t know what causes the disease that decays tissue and kills sea stars. They say it is likely a pathogen, but environmental factors may play a role. The ranger at the reserve said he has seen the return of some starfish, but they are farther out in the pools and hard to spot.

The Fitzgerald Marine Reserve and the tiny parking lot open every day at 8 a.m., but you can get there earlier and find parking in the neighborhood. There is a bathroom in the parking lot and rangers on duty. Take advantage of the rangers’ knowledge and ask them questions about the wildlife; they are happy to answer.

I spoke to a ranger, and he recommended we take the short trail to Seal Cove, where there are more tide pools. The trail became the highlight of our day!

The half-mile path to the Seal Cove staircase leads through a 100-year-old grove of Monterey cypress trees. Because it was a foggy weekday morning, we had the place to ourselves. We walked into a fairy tale.

Seal Cove was pretty cool as well, and there were seals—harbor seals to be exact. They bobbed up in the water close to shore, obviously waiting for us to clear the beach so they could come up. I took a few photos and obliged.

It is really important to stay at least 300 feet away from the seals, especially during pup season. If the moms get spooked, they might abandon their pups onshore, so stay away!

Also, since the three miles of shoreline here is a reserve, no collecting of any kind is allowed. The rangers are there to make sure people don’t disturb the delicate nature of the preserve.

While exploring the tide pools in the cool ocean air, we worked up an appetite, so we drove 2.5 miles south to the tiny town of Princeton by the Sea. Despite the slightly pretentious name (some of the streets are named after colleges), the town is home to Pillar Point Harbor and one of the largest marine fishing fleets in Northern California. Around 200 fishing boats and 170 recreational boats harbor here.

Visitors can buy sustainably caught fish right off the boat, eat at a delicious seafood restaurant, or visit an artsy boutique.

We ate at the Half Moon Bay Brewing Company because I remembered going there several times in the past and loving it. Okay, we still loved it, but it’s expensive! I think prices have increased due to the prolonged government-mandated COVID shutdown.

But it’s a nice place to eat inside or out. Guests can enjoy heat lamps and fire pits outside. We ate inside, but I think we would have been warmer outside.

After lunch we visited an artsy boutique on Capistrano Road but refrained from buying anything.

To end the day, we drove one mile down Airport Street to Pillar Point Bluff to look at the view. There is a small parking lot and a short trail up to the 220-acre bluff top. The parking lot is right next to the U.S. Air Force Tracking Station, noticeable because of its giant protruding “golf ball.”

As it turns out, the “golf ball” houses specialty measuring equipment. The Pillar Point facility was built in 1940 to defend the coast during World War II. A subordinate of the Vandenberg Air Force Base Space Wing, the station is now used to monitor and track missiles fired from Vandenberg, located 280 miles to the south.

The public is not allowed to wander the grounds, but you can get a great view from the bluff tops. If you go, note that the cliffs are unstable and the ground can go out from under you, so stand back from the edge!

It’s open daily at 8 a.m. Closing time varies by season. During seal pupping season, the beach is closed to walkers but tide pools are still accessible. Bring water, a warm jacket, non-slip shoes, and a change of shoes and socks.

Karen Gough is a writer and travel enthusiast. She shares her family’s travel tales at thefootloosescribbler.com.