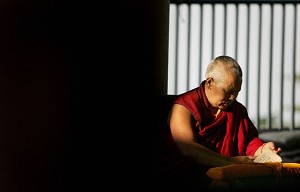 BEIJING—Tibet's language, customs and traditions are fading away and Tibetans live in fear as they become an insignificant minority in their Himalayan homeland, the Dalai Lama will say in a speech on Monday.

The Dalai Lama, Tibet's exiled spiritual leader, will urge the international community to call on China to respect freedom of expression during the Beijing Olympics, according to an advance copy of his statement obtained by Reuters.

Monday marks the 49th anniversary of an uprising crushed by the Chinese People's Liberation Army, driving the Dalai Lama, now 72, into exile in India.

“The language, customs and traditions of Tibet … are gradually fading away,” the Dalai Lama will say in the speech from Dharamsala, the north Indian hill station where he lives.

Tibetans “have had to live in a state of constant fear, intimidation and suspicion under Chinese repression”, he will say.

“Repression continues to increase with numerous, unimaginable and gross violations of human rights, denial of religious freedom and the politicisation of religious issues.”

As a result of China's policy of population transfer, the non-Tibetan population has increased many times, reducing Tibetans to an “insignificant minority in their own country … I urge the Chinese government to bring an immediate halt to such policies”, the Dalai Lama will say.

The atheist Communist Party has competed against the Dalai Lama for the loyalty of his people but the 1989 Nobel Peace Prize winner remains the single most important figure in Tibetan life.

China has defended itself saying it ended centuries of serfdom and has poured billions of dollars to develop Tibet and raise the living standards of the impoverished, predominantly Buddhist region.

Turning to the Olympics, the Dalai Lama will say he has supported Beijing hosting the Games from the very beginning, dismissing an accusation by China's top official in Tibet, Zhang Qingli, that he was trying to “sabotage and cause trouble”.

The Dalai Lama will urge the international community to urge China to prove itself a good host by respecting freedom of expression during the Games.

“The world should … explore ways of investing their collective energies in producing a continuous positive change inside China after the Olympics have come to an end,” he will say.

The Dalai Lama will have no harsh words for Chinese President Hu Jintao, who said last week stability in occasionally restive Tibet had a bearing on the stability of China as a whole.

The Dalai Lama will welcome China's emergence as a powerful country thanks to its economic progress, but he will prod China to improve observance of the rule of law, transparency, the right to information and freedom of speech.

Despite “no concrete result” in talks between China and the Dalai Lama's envoys, the Dalai Lama will say his “determination to pursue the middle-way policy and to continue our dialogue with the Chinese government remain unchanged”.