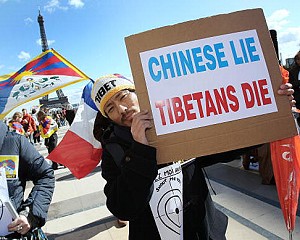 People demonstrate in support for Tibet and against violence in the Chinese region, on March 21, 2008 in Paris. (Patrick Kovarik/AFP/Getty Images)
China

KANGDING, China—Tibetans in China's tense southwestern province of Sichuan said on Friday they believed police had killed several people in anti-Chinese demonstrations there this week, disputing official claims none died.

China's communist-controlled Xinhua news agency reported overnight that police shot and wounded four protesters this week in a heavily ethnic Tibetan part of the province, where protests broke out after anti-Chinese riots in neighbouring Tibet a week ago.

The unrest has alarmed China, keen to look its best in the run-up to the Aug. 8-24 Olympic Games in Beijing when it hopes to show the world it has arrived as a world power.

China's crackdown has drawn international criticisms, with U.S. House of Representatives Speaker Nancy Pelosi calling the situation in Tibet a challenge to the world's conscience and Germany urging Beijing to allow foreign observers in the region.

Chinese mountaineers chosen to take an Olympic torch to the top of Mount Everest said their journey there through Tibet would be a show of national unity against exiled Tibetan leader the Dalai Lama, whom Beijing accuses of instigating the unrest.

Who Are the Tibetans,
What is Tibet ?

Tibetans in China's southwestern province of Sichuan said on Friday they believed several people had been killed in anti-Chinese demonstrations there this week, disputing official claims none had died in the restive region.

Here is some background about Tibet and the Tibetan populations living in neighbouring Chinese provinces.

— Mostly Buddhist Tibetans have lived on remote, high-altitude plateaus and grasslands by the Himalayas for centuries. Hundreds of thousands still follow a nomadic lifestyle, raising yaks, sheep, goats and horses on grasslands.

— Generally calling themselves “Bodpa”, they speak dialects derived from the written Tibetan language.

— Tibetans have been formally classed as one of China's 56 ethnic groups since Chinese troops were sent in in 1950.

— Bordering India, Nepal, Bhutan and Myanmar, Tibet's boundaries have changed over the centuries.

— Known as the “land of snows” and the “roof of the world”, it is ringed by mountains—the Himalayas to the south and the Kunlun mountains to the north.

— In 1965 China established the TAR on the central Tibetan plateau. The area the size of South Africa is the highest region on earth at more than 4,000 metres.

— The capital Lhasa lies in the southeast. The world's highest mountain, Mount Everest, is on its western border with Nepal.

— The founder and leader of Tibet's government-in-exile, the 72-year-old says he wants autonomy, not independence for Tibet. China brands him a separatist and blames him for last week's “riots.”

— The government-in-exile says more than 111,000 Tibetans live in exile, the majority in India.

— Tibet's population and demographics are a sensitive issue. Exiles claim many Han Chinese have moved to the TAR and the adjacent Tibetan areas, marginalising the estimated 6 million Tibetans.

— Some exiles say Tibet encompasses both the TAR and the Tibetan areas—a Western Europe-sized area, covering about 25 percent of China. But China says Tibet and its adjacent areas were never unified under a single administration.

— The government-in-exile calls Tibet “Cholka-sum”, meaning “The Three Provinces”. These historic areas are U-Tsang, which roughly corresponds to the TAR, Amdo centred around Qinghai Province, and Kham centred around Sichuan in China's southwest.

“We shall go all out to ensure the smooth movement of the torch relay. We must strengthen ethnic unity while hostile forces try to drive a wedge between ethnic groups,” Yin Xunping, an official with the Tibet mountaineering effort, was quoted as saying by the official Xinhua news agency.

Tensions remain high in Tibet, Sichuan and other neighbouring areas where the government has poured in troops.

Kangding, a heavily Tibetan town in Sichuan and a gateway to the restive region, was crowded with troops, some on patrol, some loudly practising martial arts moves in the town square.

“I'm in this to make money, but no matter how much you pay me I won't go that way,” one Kangding driver said.

“Everyone here believes that our people died, maybe 10 or more,” he told Reuters, asking not to be named, fearing punishment for talking to reporters.

Troops and anti-riot police have set up roadblocks and are keeping out foreigners.

“With all the troops that have gone up there, it's under control now. They have tried for all those years to gain independence and failed. So it won't happen. Not now — it's impossible,” said Ran Hongkui, a Chinese shopkeeper on the route passed by convoy of armed police heading west.

China's response to the rioting has triggered international criticism and some calls to boycott the Games opening ceremony.

Pelosi, who met the Dalai Lama in his exile home in the Indian town of Dharamsala, said Tibet was “a challenge to the conscience of the world”.

Radio Free Asia, a U.S.-funded broadcaster, said on Thursday up to 2,000 Buddhist monks and laypeople continued to protest in Huangnan Prefecture, Sichuan. The report could not be verified.

Authorities said they had arrested dozens of people.

The Tibet Daily Web site (www.tibetdaily.net) published pictures of the most wanted suspects, many photographed in the thick of the rioting and including two men in monks' robes.

Most appeared to be young men. One looked to be wielding a sword while others were hurling rocks.

Its newsreaders echoed Beijing's insistence that the violence was orchestrated by the “Dalai clique” agitating for independence and trying to embarrass China ahead of the Games.

The 72-year-old Dalai Lama, who fled Tibet in 1959, says he is against the violence, only wants greater autonomy for his homeland and is willing to travel to Beijing for talks.

The Chinese press has intensified its vilification of the Nobel Peace Prize winner, while Pelosi called for an international probe to clear the Dalai Lama's name.

The Tibet Daily called him a “jackal with a human face and the heart of a beast” and accused him of “never giving up hoping to restore their corrupt, dissolute theocracy and their privileges as feudal rulers and serf masters”.

In a phone call with Chinese counterpart Yang Jiechi, U.S. Secretary of State Condoleezza Rice urged China for restraint. Yang told her the Dalai Lama was to blame for the riots.

“They attempted to exert pressure on the Chinese government, disturb the 2008 Beijing Olympics and sabotage China's social stability and harmony,” Xinhua quoted him as saying.