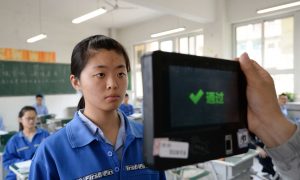 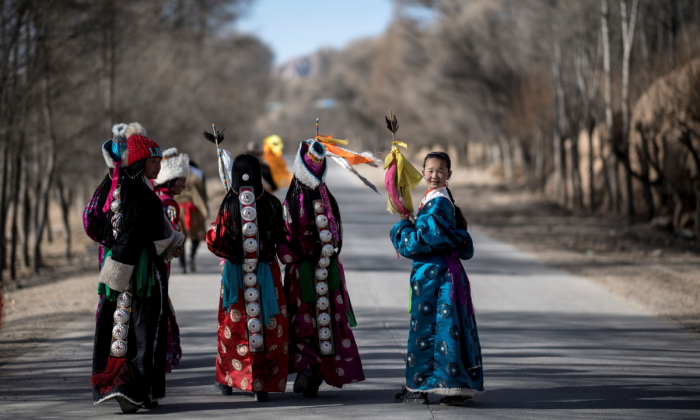 Girls dressed in traditional Tibetan costumes walking down a road after a festival to mark the Tibetan New Year celebrations in the village of Douhoulou, some 50 kms south of Guide on the Qinghai-Tibet Plateau on Feb. 25, 2018. (JOHANNES EISELE/AFP/Getty Images)
China Human Rights

Tibetans attempting to hold Tibetan language classes for their students are being suppressed by the Chinese Community Party (CCP).

A government notice obtained by Tibet Watch in December 2018 directed local officials to “put a stop to monasteries running schools” that are not sanctioned by the CCP in the eastern Tibetan town of Nangqen.

The CCP has been working to sever the Tibetan people from their cultural traditions. John Jones, campaign manager for Free Tibet, described to The Epoch Times the CCP’s interference in daily activities at Tibetan monasteries—places central to Tibetan culture and life.

“The [CCP] has long identified monasteries as a source of resistance and sought to break the bond between them and the surrounding communities,” Jones said.

The regime would demolish monasteries in the past, but now, it uses surveillance and suppression instead. “Monasteries are now heavily monitored with CCTVs installed inside and regular inspections,” he said.

China is in fact violating its own constitution with this behavior.

“It also violates China’s own constitution–Article 4 states that ‘All nationalities have the freedom to use and develop their own spoken and written languages,'” Jones said.

One Party, One Culture

The CCP has worked over the years to uproot traditional Tibetan culture and slowly replace it with communist ideology.

According to the CCP notice, any monasteries or monastics that hold Tibetan language classes must be held “strictly” accountable. The notice also demanded that “ideological education” for both parents and students must be improved.

Jones said that Tibetan language is already treated at as a foreign language in schools.

“Chinese state schools in Tibet only appear to teach Tibetan as a subject in its own right,” Jones said, comparing it to how one may learn French in an English speaking school.

“For this reason, classes provided by monasteries have become a crucial element in the preservation of the Tibetan language,” said Jones.

The notice also claimed that there is a “harmful nature of monasteries running open school,” but did not given specific details of what the harm was.

“Monasteries historically were the center of Tibetan community life,” Jones said. “Tibet’s monks and nuns have also played a crucial role in preserving Tibet’s national identity and led many of the protests against Chinese rule.”

Jones describes the ban on this sort of education as a “real concern to Tibetans.”

A famous Tibetan political prisoner and language campaigner, Tashi Wangchuk, has been petitioning to ensure that all Tibetan children have access to their mother tongue, according to Jones.

Other than organizations like Free Tibet, the governments of some countries have taken a strong stance in support of the Tibetan people.

In December 2018, President Donald Trump signed into law an order that United States citizens should have the equal ability to travel to Tibet as Chinese citizens have to freely travel through the United States.

Under the Reciprocal Access to Tibet Act, the United States will impose a visa ban or revoke active visas of Chinese officials who deny American citizens the ability to travel to Tibet.

In May 2018, Congress approved $17 million to support Tibetans living both inside and outside of their home country. The support includes the Tibetan government-in-exile, lead by Lobsang Sangay.

The support is consistent with U.S. policy for decades, which the CCP denounces as the United States meddling in its domestic affairs.