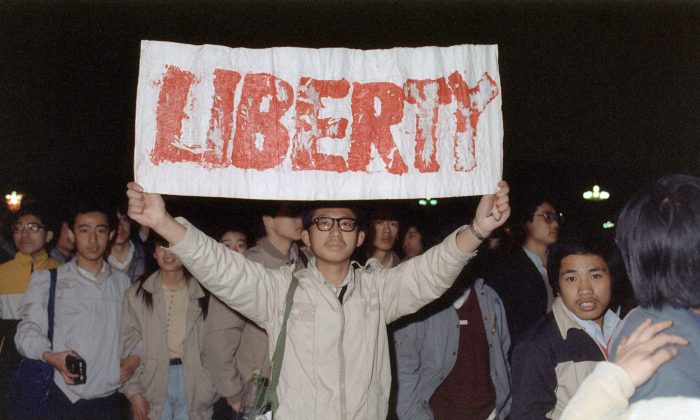 A student displays a banner with one of the slogans chanted by the crowd of some 200,000 pouring into Tiananmen Square in Beijing on April 22, 1989. (Catherine Henriette/AFP/Getty Images)
China Human Rights

Tiananmen Square: The Massacre the Chinese Regime Tries to Erase

Thirty-two years later, the Chinese communist regime still tries to repress the memory of the bloody massacre of June 4, censoring all mentions, detaining outspoken dissents, and keeping younger generations unaware of what actually happened that night.

Much of the world has been aware of the truth that the communist regime’s leader sent troops to quash the protesting students who called for a more open society at Tiananmen Square, the center of the capital Beijing, on June 4, 1989, resulting in the killing of thousands of Chinese students. But in the land controlled by the Chinese Communist Party (CCP), censorship continues.

Chen Siming, who posted a photo memorializing the bloody event, was given a 15-day administrative detention by authorities of Zhuzhou city of the southern province of Hunan on May 31.

For years, Chen has persisted in memorializing the 1989 Tiananmen Square massacre. In 2018, he was detained for taking photos in a park with a tank in the background on June 4.

“I had been detained four times since 2017, three for memorizing the June 4,” said Chen in the tweet on May 30. “But I still want to memorize the most important day in contemporary history, which is a citizen’s responsibility.”

Huang Xiaomin, a supporter of the student-led pro-democratic movement, is being held in detention, said his daughter on May 29, for “picking quarrels and stirring up trouble,” a frequent charge used by the CCP to silence critics, the Weiquanwang blog first reported.

The reason is still unknown, Huang’s friend, surnamed Xie, told The Epoch Times in an interview, but he mentioned that the local authorities summoned Huang on the phone while he had tea with Huang on May 28.

Meanwhile, another outspoken dissident is missing in southwestern China. Yang Shaozheng’s wife has lost contact with him for over two weeks, his friend Yang Zili, told NTD on May 31.

The former economics professor, Yang Shaozheng, who was fired for criticizing the CCP in 2018, had been summoned by authorities several times, said Yang Zili, a friend and fellow activist. His wife believes that Yang is probably being detained by the authorities, the friend added.

Another activist from southwestern Sichuan Province told The Epoch Times that the police came to his home on Thursday, warning him to be silent on June 4 and July 1, the ruling CCP’s anniversary day. An activist in Beijing, who also prefers not to disclose their name, told The Epoch Times that the local authorities informed him that he should travel to other cities on June 4 and July 1.

The continued censorship has repressed references to Tiananmen from the Chinese internet and erased them from students’ history books, including the name of the then top leader of the regime, Zhao Ziyang.

Many young Chinese grew up unaware of the brutal event 32 years ago, as teachers fear touching sensitive topics defined by the CCP. Media outlets controlled by the state are not allowed to report on it. A Foreign Ministry spokesperson only described it as a “political disturbance” when asked by Western journalists.

A middle school teacher in Hunan Province, surnamed Huang, admitted that young people in mainland China, under the pervasive censorship of information, have become indifferent.

“The young generation limits their attention to money, good wine, savory dishes, and having fun. They are indulging in Douyin on the phone,” Huang said in an interview with Radio Free Asia. Douyin is a popular social media platform, TikTok’s sister app in China.

“For equality and justice, they don’t have such ideas. They only want enjoyment,” Huang said.

Yi Ru and Hong Ning contributed to this report.