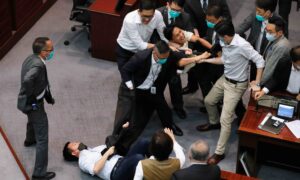 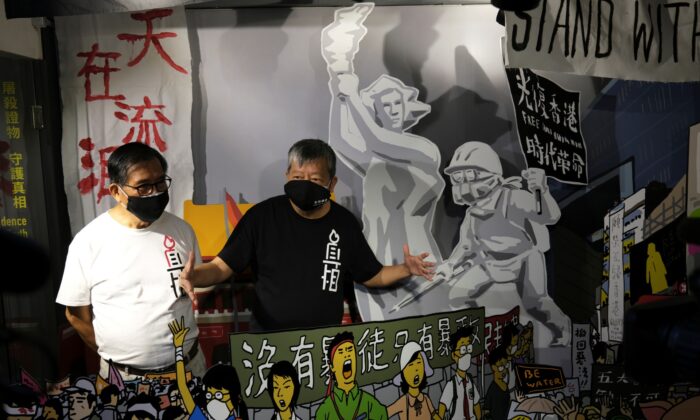 Lee Cheuk-yan, chairman of the Hong Kong Alliance in Support of Patriotic Democratic Movements in China, speaks in front of an exhibition board during the opening of anti-extradition bill protest special exhibition at the June 4th Museum for the 1989 Tiananmen crackdown, in Hong Kong, China, on May 20, 2020. (Tyrone Siu/Reuters)
HK Current Affairs

HONG KONG—Hong Kong people, unable to hold a mass vigil due to CCP virus curbs, should light candles instead to commemorate pro-democracy protesters killed in and around Beijing’s Tiananmen Square 31 years ago, an organizer said on May 20.

This year’s June 4 anniversary is likely to be particularly poignant, following months of protests and unrest in the Chinese-ruled city.

In past years, tens of thousands of people in Hong Kong have joined sombre and peaceful candlelit vigils in a downtown park, the world’s biggest commemoration of the 1989 crackdown in Beijing, when Chinese troops opened fire on student-led protesters.

On Tuesday, Hong Kong authorities said the limit on group gatherings to no more than eight people would be extended at least until June 4.

Lee Cheuk-yan, chairman of the Hong Kong Alliance in Support of Patriotic Democratic Movements of China, which organizes the annual vigils, told Reuters on Wednesday he believed the motive for the extension was “political suppression.”

Hong Kong leader Carrie Lam said on Tuesday the measures were not based on political considerations.

Police have yet to respond to an application for the vigil to be held in Victoria Park, Lee said, adding that he was not optimistic.

“We have to have a plan B,” Lee said. “Instead of one point, we will do it everywhere, still with the powerful candlelight to condemn the massacre and mourn for those who died in 1989.”

China has never provided a full accounting of the violence, but rights groups and witnesses say the figure could run into the thousands. The topic is taboo in China.

Lee said the Tiananmen vigil represented “a litmus test for one country, two systems,” the agreement governing Britain’s handover of Hong Kong to China in 1997, which allows it to retain democratic freedoms unavailable on the mainland controlled by the communist regime, such as holding the annual vigil.

Hong Kong pro-democracy protesters denounce what they see as China’s gradual erosion of those freedoms by Chinese Communist Party rulers in Beijing, a charge the regime denies.

Britain’s last governor, Chris Patten, urged Hong Kong not to give into growing pressure from Beijing and to continue marches and avoid violence.

“…June 4th may be impossible because of coronavirus restrictions but there is always June 5th, 6th and 7th and July 1,” Patten said, referring to traditionally large marches that mark the July anniversary of the handover.

He was talking via an online link to members of the Foreign Correspondents’ Club, comments likely to annoy Beijing, which has repeatedly blamed Western forces for stirring up trouble.

Authorities allowed bars, cinemas, and gyms to re-open this month and said religious gatherings can resume with certain safety rules. Bath houses, karaoke bars, and night clubs will stay closed for another week.

By Sarah Wu. Epoch Times staff contributed to this report.