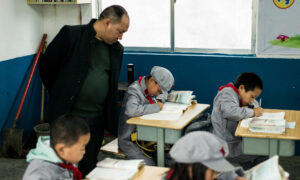 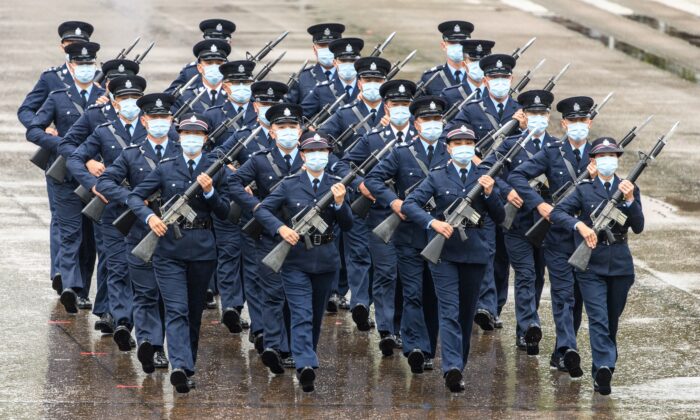 Police officers perform a new goose-stepping march, the same style used by police and troops on the Chinese mainland, at the city's police college during an open day to mark the National Security Education Day in Hong Kong on April 15, 2021. (ANTHONY WALLACE/AFP via Getty Images)
Thinking About China

The Chinese Communist Party (CCP) has largely silenced annual observations of the oppression that took place in 1989 in Tiananmen Square throughout the Chinese-speaking world. Nevertheless, what happened on that day continues to reverberate through modern China and within today’s CCP.

Nowhere is this more evident than in China’s claim to victimhood. Beijing and the CCP see themselves as constantly under siege from sinister overseas forces—military, political, economic, and cultural. “Hurting the feelings of the Chinese people” is one of gravest sins a foreign government, institution, or individual can commit. And yet few are aware of how the “China-as-victim” motif is the direct—and cynical—result of Tiananmen.

Almost every nation in the Asia-Pacific can claim, with some justification, of being a victim. India, Malaysia, Singapore, Indonesia, and Vietnam were just a few of the victims of European colonialism. The United States violently occupied the Philippines, while “Yankee imperialists” bombed North Vietnam and invaded Cambodia. Other countries, particularly Korea, were victims of Japanese aggression during the first half of the 20th Century. Even Japan can declare victimhood, as it was the first—and so far only—target of nuclear weapons.

Feelings of victimization are not limited to the Asia-Pacific. Vladimir Putin has used patriotic education to manipulate Russia’s “wounded self-esteem” to his politics. And Donald Trump played a similar populist-victimhood card, winning the 2016 election by asserting that the United States has been made a sucker by foreign powers.

Few, however, have raised victimization to a fine art better than the CCP. Interestingly, this “China-as-victim” notion is rather a recent phenomenon. According to Zheng Wang’s excellent book “Never Forget National Humiliation,” the official historical narrative of China was very different immediately after the founding of the People’s Republic.

From 1949 to approximately 1990, the official history of China was triumphalist. The Chinese were the victors who had thrown off the mortifications of the past—particularly the so-called “century of humiliation” and Japanese occupation—and created a new self-governing state. This is what Mao Zedong meant when, in announcing the establishment of the People’s Republic of China (PRC), he declared that “the Chinese people have stood up.”

This triumphalism persisted throughout the first 40 years or so of the PRC’s rule. Official histories of China largely ended with the victorious creation of the People’s Republic. I can personally recall visiting the National Museum of China in the 1990s, which had few exhibitions dedicated to Chinese history after 1949. It certainly did not cover such uncomfortable events as the Great Leap Forward or the Cultural Revolution—and definitely not the Tiananmen protests.

This began to change in the early 1990s as a direct result of the Tiananmen protests. According to Wang, the CCP was shocked that Chinese youth could be so “polluted” by such foreign ideas as democracy and freedom of thought and expression.

This subsequently resulted in a new program of patriotic education that emphasized the narrative of “China-as-victim.” It is, however, nothing less than a cynical ploy by the CCP to manipulate Chinese history and the feelings of the Chinese people, as a means to stay in power.

China’s national history now emphasized an “us-against-them” theme could be seen everywhere, such as in the expansion of new monuments and museums observing Chinese suffering at the hands of the Japanese during the Pacific War, or in conspiracy theories that the United States had deliberately bombed the Chinese embassy in Belgrade during the 1999 Kosovo War.

“Red tourism” also exploded, as the Chinese flocked to museums and memorials celebrating the people’s efforts to oppose foreign invaders. Modern Chinese TV is full of cheap and salacious movies about fighting the Japanese or the Nationalists, while patriotic films like “Wolf Warrior” rival Hollywood when it comes to choreographed combat, Michael Bay-style explosions, and snarling, comic-book villains—usually Americans.

This shameless appeal to nationalism and the subsequent manipulation of historical memory is due mainly to the fact that the CCP has little legitimacy otherwise. It has pretty much jettisoned Marxist ideology as policy. Nor can it base its authority solely on economic performance, especially as the economy sputters.

A much darker side of this victimization, however, is how much it has infected Chinese foreign and security policy. International relations for most countries is about getting along; it is a process of negotiation, compromise, and concession. But victims, because they believe that they have suffered unfairly, tend to feel that they should not have to concede anything, especially to their real or imagined bullies. Rather, victims feel that they are entitled to indulgences and privileged treatment.

What makes this attitude all the more worrisome is China’s growing military might. Beijing has for several years invested considerable resources into building up its armed forces—and it is paying off. The People’s Liberation Army (PLA) is a much more capable force, relative to its neighbors, than it was twenty years ago.

These dual trends—the modernization of the PLA, together with the CCP’s “China-as-victim” narrative—have resulted in an increasingly belligerent regime in Beijing that believes it is due its place under the sun. This “entitled victimization,” in turn, denotes a China that is much less inclined to negotiate and compromise, and less willing to support the status quo or pursue peaceful routes to conflict-resolution—such as in the South China Sea. Rather, it means a power that is increasingly willing to use force or the threat of force to get what it wants.