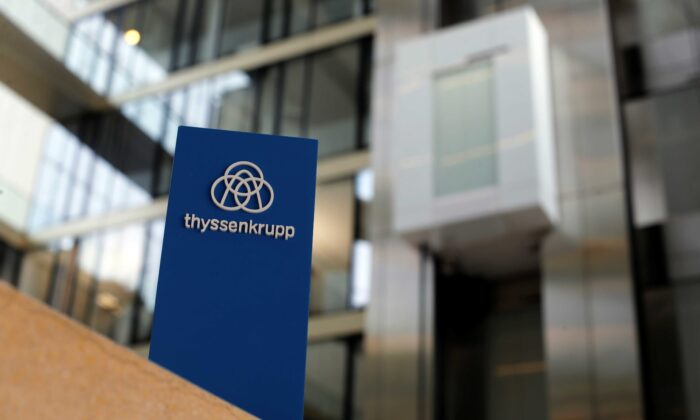 The logo of Thyssenkrupp is seen near elevators in its headquarters in Essen, Germany, Nov. 21, 2019. (Leon Kuegeler/Reuters)
Companies

Thyssenkrupp Slashes Another 5,000 Jobs to ‘Stop the Bleeding’

German conglomerate Thyssenkrupp plans to cut another 5,000 jobs to stem losses across its sprawling empire, it said on Thursday, after reporting its operations were 1.6 billion euro ($1.9 billion) in the red in the latest financial year.

Despite closing the sale of its elevators business in July for more than 17 billion euros to help fund restructuring and cut debt, the group remains in crisis and CEO Martina Merz said more painful restructuring will be needed to stop burning cash.

The company said it expected to make a decision about what to do with its struggling steelmaking business in the spring of next year after the division swung to a loss of nearly a billion euros as the global slowdown from COVID-19 lockdowns hit demand.

“We’re not yet where we need to be. The next steps could be more painful than the previous ones. But we will have to take them,” Merz said. “Our key message to the capital market is this: (we will) stop the bleeding.”

Thyssenkrupp said its adjusted operating loss would narrow in the year through September 2021 to the low hundreds of millions of euros though it would still have negative cash flow from ongoing businesses of about 1.5 billion euros.

Shares in the company, which have already fallen about 60 percent this year, slumped nearly 10 percent with analysts saying the outlook for the coming year was disappointing.

The new job cuts come on top of 6,000 layoffs announced last year, taking the total number to 11,000 but drawing criticism from some investors, including No. 2 shareholder Cevian, that the group’s restructuring is too slow and not radical enough.

“The elevator division was sold to be able to fundamentally fix the other businesses. Not enough has happened since,” Friederike Helfer, partner at Cevian and a member of Thyssenkrupp’s supervisory board, said.

“It’s painful to watch, because it doesn’t have to be like this.”

However, Juergen Kerner, Thyssenkrupp’s deputy supervisory board chairman and chief treasurer of Germany’s biggest union, IG Metall, said that the key was to avoid forced layoffs and maintain sites and jobs.

That means another 7,400 will have to go over the next three years, accounting for 7 percent of a total workforce of 104,000.

Thyssenkrupp tried to set up a joint venture for its steel business with India’s Tata Steel but it was blocked by Brussels on antitrust grounds last year. It has also held talks with Swedish steelmaker SSAB and is currently reviewing a non-binding indicative offer from Britain’s Liberty Steel.

By Christoph Steitz and Tom Käckenhoff