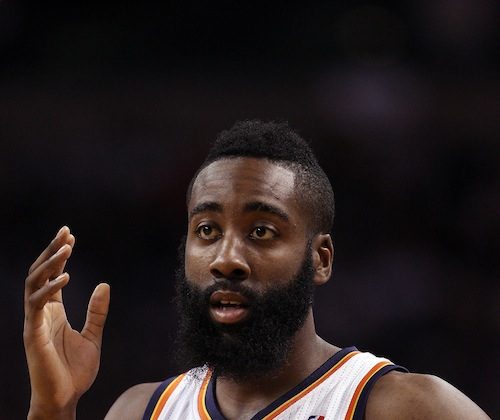 James Harden averaged 16.8 points per game this past season for the Thunder. (Elsa/Getty Images)
NBA

Oklahoma City guard James Harden was named the NBA’s sixth Man of the Year Thursday, according to a report on the league’s website.

The 6-foot-5-inch Harden, who was third on the team in scoring at 16.8 points per game, received 115 of possible 119 first-place votes, easily outdistancing runner-up Louis Williams of Philadelphia.

Harden was the third overall pick in the 2009 NBA draft. He scored in double figures in 58 of 62 games. The former Arizona State star came off the bench in 60 of those 62 games, making him eligible for the award, which requires players to come off the bench more times than they start in order to qualify.

Harden has averaged 18.3 points in four playoff games this postseason for the Thunder.