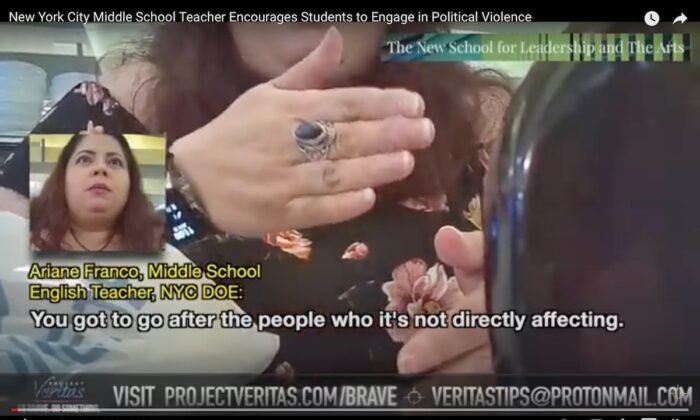 Ariane Franco, a New York City middle school English teacher, tells a reporter that she teaches her students strategies for political violence, in this still from video released on Sept. 11, 2022. (Project Veritas/Screenshot via The Epoch Times)
Values and Tradition

“I was like, ‘Guys, there’s strategic ways to do this.’ … I brought up crazy organizations that have done this. Like, they chose which places to throw bricks in,” she said.

Franco made this statement while being recorded by a hidden camera, the footage from which has now been released by Project Veritas.

Instead, students should aim their bricks at the people causing problems, according to Franco.

“Throw at people that are actually doing the things that [need to] change,” she said.

Although Franco’s LinkedIn page has recently been removed, its DuckDuckGo thumbnail shows that she teaches middle school English at The New School for Leadership and the Arts in the Bronx.

Many Bronx residents have recent memories of thrown bricks. In 2020, rioting in their neighborhoods following the death of George Floyd left windows shattered and stores looted.

Franco told Project Veritas that she made proper protest planning a large portion of her curriculum.

“We spent a good two months based on like, how to organize, what’s their purpose, the ones that work, what did they do?” she said.

The parts of the interview that Project Veritas released didn’t explain what teaching about protests had to do with teaching English.

Franco also said that before class started, she criticized, responded to, and added words to the Pledge of Allegiance.

“I tell them—my kids—we don’t stand up for the Pledge [of Allegiance]. We do the Pledge of Allegiance every morning, you know, but we keep going on our business,” she said. “It was a class decision at the beginning of the year: ‘They’re not talking about me, so I’m not standing up,’ you know?”

At first, Franco said she knelt for the Pledge of Allegiance as a symbol of support for Black Lives Matter, although she couldn’t “go all the way” to a kneeling pose.

Franco also said she teaches kids to say “with liberty and justice for all, [adding] and we will fight until that is true” at the end of the pledge.

A kid can’t fight by voting, but can be a “critical thinker” who challenges parents and other adults, she said.

“I tell my students that all the time; I’m like, ‘Guys, nothing is going to change until you guys are ready,’” Franco said.

She noted that she’s preparing students so that they “don’t mess up this world too much.”