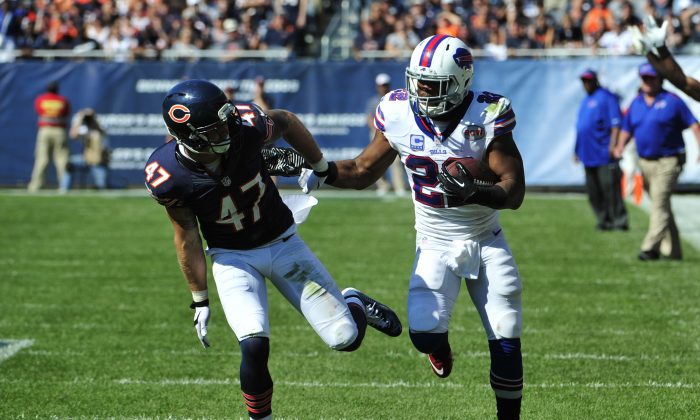 Fred Jackson (R) of the Buffalo Bills prepares to give Chris Conte of the Chicago Bears a stiff-arm in overtime at Soldier Field in Chicago on Sept. 7, 2014. (David Banks/Getty Images)
NFL

The NFL is back and did not disappoint in Week 1. It gave us some of the things we’ve come to expect and left us wondering how some new story lines will develop.

We got our kicks from Peyton Manning screaming out “Omaha” and Tony Romo throwing ill-advised interceptions—or “Romoceptions,” but more importantly, we were reminded of what it is like to see great action like Buffalo Bills running back Fred Jackson stiff-arming Chicago Bears safety Chris Conte during a 38-yard run to set up the winning field goal in overtime.

New Orleans was up 20–7 on the Atlanta Falcons late in the second quarter, fell behind 24–20 late in the third quarter, then regained, lost, and regained the lead once again before ending tied at the end of regulation. The Falcons beat the Saints in overtime on a 52-yard field goal.

In Pittsburgh, Cleveland Browns quarterback Brian Hoyer led three touchdown drives in the second half to erase a 24-point halftime deficit; though the Steelers kicked a 41-yard field goal as time elapsed to win the game.

But maybe more importantly, we’ll hear less about Johnny Manziel going forward as the starting QB job in Cleveland should be securely in Hoyer’s hands for at least the next few weeks.

In terms of the unexpected, the New England Patriots were beaten up by the Miami Dolphins in the second half and lost 33–20. They had a 20–10 lead at the half.

Also, who saw Minnesota putting up the most lopsided score (34–6) of the weekend on the road in St. Louis? Who saw Tennessee, a 7–9 team last season blowing out Kansas City, 11–5 last season, at Arrowhead Stadium?

The Patriots had won 10 consecutive games on opening weekend, which was the longest current streak in the NFL. Not surprisingly, Patriots quarterback Tom Brady had an 11–1 record on opening day games, but now his team sits dead last in the AFC East.

Will the AFC East be a battle to the end or will the Patriots shrug off Week 1 and roll to the expected division title? The question is likely: Are the Dolphins really that good since the Bills and New York Jets weren’t spectacular.

The Bills came away with an overtime win in Chicago, but the Bears’ turnovers were really the difference. The Jets beat a hapless Oakland Raiders team that gained a Week 1-worst of 158 yards on offense.

The Philadelphia Eagles made history by being the first team to come back from a 17–0 halftime deficit and win by at least 17 points. Their victim was the Jacksonville Jaguars who have won a grand total of 11 games in the last 3 seasons.

The bright spot for the Jags was wide receiver Allen Hurns who became the first player in NFL history to score two receiving touchdowns in the first quarter of his NFL debut.

Week 1 of the 2014 NFL season had a schedule with an “average” level of importance. By this I mean, if we were to assign two points for every divisional matchup and one point for every intra-conference matchup as a way of trying to quantify the importance of the games, we could come up with a score for all 17 weeks of the NFL schedule.

Divisional matchups are the most important for tiebreaking procedures, followed by intra-conference matchups. And, of course, the best rivalries tend to be divisional matchups such as Baltimore–Pittsburgh, Seattle–San Francisco, or Chicago–Green Bay, just to name a few.

So Week 1 wasn’t particularly strong or weak in terms of important matchups. Its score is 17. But it’ll be far more interesting than Week 2, which is the worst by this measure, having only a total of eight divisional and intra-conference matchups (score of 11).

And of course we know the final week of the regular season is quite special with 16 divisional matchups (maximum score of 32) and all kinds of playoff permutations on the line. But that’s in late December and a lot of football needs to be played before then.