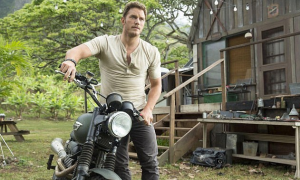 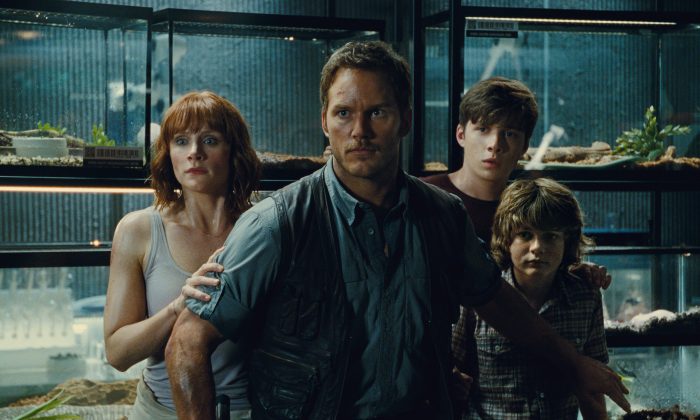 It broke Universal’s all-time Thursday night preview record. Then, Friday (opening day), it tore up box office history, raking in a whopping $82.3 million. Globally—it smashed everything in sight—the first film to ever cross the $500 million mark in one weekend.

This is blockbuster, hear it roar! This is what blockbusters were designed to do. So attention must be paid.

This is blockbuster, hear it roar!

But I cede to the original die-hards—there really is no touching Spielberg’s first thunderous dinosaur tale. It was an instant classic; it had the one-time-only element of surprise—we’d never seen velociraptors, or the stunning, cutting-edge CGI, and that magnificent T. rex with its eardrum-splitting roar; a combination of an elephant trumpet and a human scream.

Nothing beats the dread of those first earthquake-y, T. rex footfalls. We weren’t sure what that noise was, but we knew it was gonna be outrageous. It was Spielberg, after all, at the top of his game, and he’d already traumatized us with “Jaws.” The anticipation caused by the footfall ripples in that dashboard water cup made nail-biters want to chew their entire arms off.

But the people’s pocketbooks have now spoken. Roared. It takes excellent storytelling know-how to produce a wild ride even though this is now the fourth movie about raptors and rexes, and we know everything. Master Spielberg doesn’t even have to direct now; he just phones in producer advice, and breaks the box office record. Which he’d already done, many times. All hail.

Admit it die-hards—you know you’re gonna go see it. You love dinosaurs. My advice is to enjoy the ride and not sit there with your arms folded on your chest, scowling, just so you can exit the theater saying, “See? It didn’t even come close, no way man.” Live a little, “Jurassic Park” die-hard fans.

The Bang You Will Get for Your Buck

But the park reflects America’s infatuation with “New & Improved!” If we don’t get our new and improved, we bore easily. Can’t have that. Bad for business.

So just how do they go about trying to expand on perfection? “The Lost World” (1997), gave us two T. rexes and a bunch of baby velociraptors with straight-from-the-egg, full-blown lethal pack-hunting instincts—all the better to swarm Vince Vaughn’s annoying character with. Then, in 2001 Joe Johnston directed “Jurassic Park III” —giant flying pteranodons everywhere. But we were already thinking, “Feh, been there, done that.”

What “Jurassic World” showcases is a dino version of the “Rocky Horror Picture Show” line: “Come up to the lab and see what’s on the slab!” Like Dr. Frank-N-Furter, geneticist Dr. Henry Wu (BD Wong) has begat GMO Frankensaurs: unnaturally rigged genetic monstrosities.

This is the blockbuster version of Nero fiddling while Rome burns. However, we all know the state the world’s in; we’d like a little distraction please!

Everyone’s already seen the trailer with that blue-whale-sized marine-croc thingie that breaches sky-high out of its gargantuan tank, and makes a 25-foot great white shark (a sly “Jaws” tribute) look like a bait minnow.

What else? Creation: T. rex artificially begets Indominus rex. And it was not good. In gourmet chef fashion, Dr. Wu had a field day splicing extra predator features into what was already the all-time apex predator. And he thought this beast could actually be contained?

It’s highly tempting to spoil it and say what stuff he put in there, but just imagine gene-splicing Superman using Hulk, Spidey, and Flash bits.

But, Before the Unveiling …

We need some children who are going to be in danger. Cue brothers Zach; a rebellious, girl-obsessed teen (Nick Robinson), and Gray, a sweet, dinosaur-obsessed little brother (Ty Simpkins).

They fly to Costa Rica to hang with their aunt Claire (Bryce Dallas Howard). Well that was mom’s plan (Judy Greer). As Jurassic World’s manager of operations, Claire is (of course) comic-book-level obsessed with her job, working for Simon Masrani (Irrfan Khan), an immensely wealthy Indian who bought the island. Her obvious character arc screams, predictably, that she must be humanized.

Chris Pratt (“Guardians of the Galaxy”) plays Owen, a game warden, wearing a leather vest that makes him look so much like Indiana Jones, you wonder if the fact that he’s slated to eventually inherit the role of Indie from Harrison Ford, might remotely have anything to do with this costume.

He and Claire (naturally) have an obsessive, “Oh, get it over with already” bicker-chemistry. Owen was in the Navy before becoming the current obsessive park trainer of velociraptors.

This is not your father’s Navy—it’s not said, but with his cool-headedness when faced with the possibility of becoming veloci-shredded hamburger meat, along with the helmeted, bushy-beard-sporting special operators that show up grinning and blasting flying dinos out of the sky—it’s obvious he was a SEAL.

Wait a minute … the Indominus rex—is she in her pen? Or not? Are those huge claw marks that go 40 feet up the side of the concrete walls of her jungle enclosure? You know, it might be the case that they spliced some mountain goat and chameleon DNA into Miss Indominus (or it might not), but you get the idea.

Pratt’s fun, he’s a happy-go-lucky individual who’s admitted he has no problem whatsoever eating too much and getting fat; except with his movie-star looks, he knows it behooves him to stay in shape and be a leading man. But he maintains a sense of mischief and good comedic timing.

Bryce Dallas Howard, ginger-haired daughter of Hollywood legendary director Ron Howard, gets to be breathless a lot and pose Fay Wray-like while the scary monsters cavort, but she’s got the charisma and comedic chops to take this unrewarding role and anchor the movie with it.

“Jurassic World” is a blockbuster that does exactly what a PG-13 blockbuster’s supposed to do—break the box office, sell a lot of popcorn, slap your head around with spectacle, and make you chuckle.

The takeaway? We should stop messing with Mother Nature? Is it a metaphor? We can make one up on the spot: Just like they tamper with T. rex, and Indominus ends up chomping many people, are there perhaps GMO companies that are genetically tampering with food that just might be killing the world’s bees? And then there’s no food, and everybody dies? Just say no to Indominus cornfield?

With the world in the state it is, the only real criticism is that this is the blockbuster version of Nero fiddling while Rome burns. However, we all know the state the world’s in; we’d like a little distraction please—make that a lot of distraction—which is probably the real reason “Jurassic World” just busted the box office. Enjoy the ride!