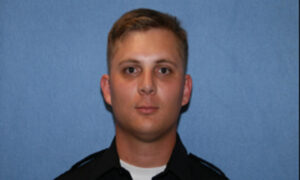 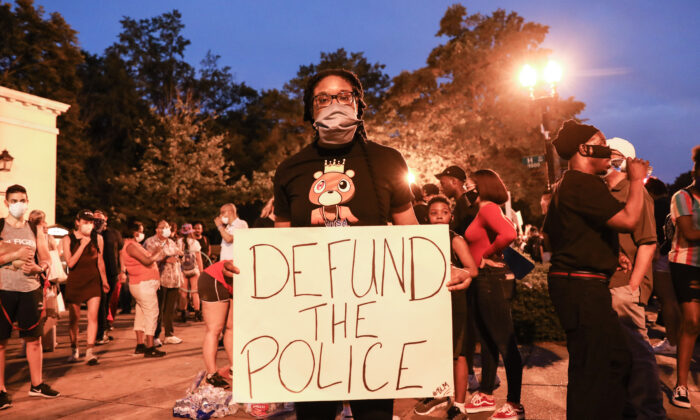 A protester holds a “Defund the Police” sign during a protest near the White House following the May 25 death of George Floyd in police custody, in Washington on June 6, 2020. (Charlotte Cuthbertson/The Epoch Times)
US News

A sheriff in Virginia has switched his party affiliation from Democrat to Republican due to rhetoric expressed by certain Democratic politicians.

Smyth County Sheriff Chip Shuler, who was elected as a Democrat in 2015, said in a statement that he’s switching parties because, according to him, police officers have faced attacks from Democrat politicians in Virginia and nationwide.

“I am changing to the Republican Party because of the relentless attack on law enforcement by Democrats in Richmond and Washington,” Shuler said in his statement last week. “My deputies work hard to serve and protect the citizens of Smyth County. As sheriff, it has been difficult to watch my deputies try to move forward during this unprecedented assault on our profession. We remain an honorable profession, and should not be judged by the bad acts of a few. I have always been a conservative throughout my law enforcement career of 38 years.”

Shuler is now the third sheriff in Virginia to make the switch in the past year or so, according to the chairman of Smyth County Republican Party, Adam Tolbert. He noted that Tazewell County Sheriff Brian Hieatt and Buchanan County Sheriff John McClanahan switched to the GOP several months ago.

McClanahan, who switched parties last year, said that he can’t “be associated with the National Democratic Party” due to bills introduced at the state and federal level that would “negatively affect” communities and his “livelihood.”

“Democratic leaders across the country have been ones that are pushing for bills that negatively affect law enforcement, as well as other values I stand for,” he said in his statement. “I have many friends within our local Democratic Party and hold no negative feelings toward them.”

Hieatt became a Republican in July of last year—coming in the midst of riots and violence that had erupted across the United States in the wake of George Floyd’s death.

“I’m not saying our locally elected Democratic officials are bad. What has upset me is on the state and national level,” he said at the time, according to local media. “I think our locally elected Democrats truly care for our people in Tazewell County, but the ones in the state and national level do not care about our citizens.

“Why are we being easy on criminals, not the victims?”

Hieatt referenced a recent law in Virginia that stipulates that a person who steals $1,000 or more can be charged with a felony—instead of $500, the former amount.

“Laws need to make it harder on criminals and not on victims,” he said.

The Democratic Party of Virginia didn’t respond to a request for comment by press time.