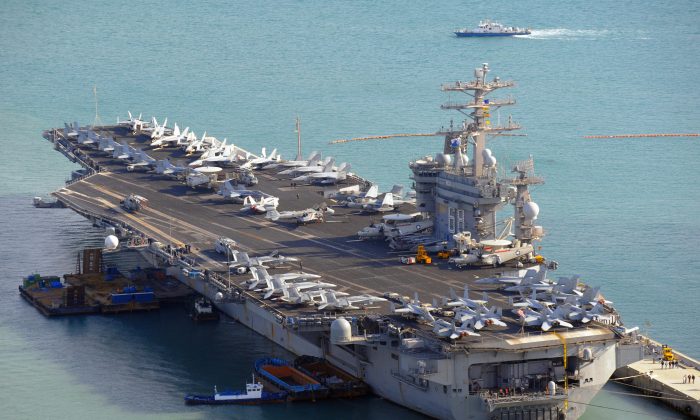 The USS Nimitz CVN 68, a nuclear-powered aircraft carrier, arrives at a naval base in the South Korean port city of Busan, some 450 kms southeast of Seoul on Feb. 28, 2008. The Nimitz and its associated strike group completed a tai-carrier exercise with two other aircraft carriers in the Wester Pacific, adding to the military posture aimed at pressuring Kim Jong Un to come to the negotiating table. (KIM JAE-HWAN/AFP/Getty Images)
Asia & Pacific

Three U.S. aircraft carriers and their accompanying strike groups of warships, fighter jets and other aircraft completed a rare military exercise with South Korea and Japan in the Western Pacific Monday.

The four-day military exercises finish as President Donald Trump heads home to the United States after a 12 day trip to Asia.

The drills come after multiple threats of a nuclear weapons attack by North Korea.

In its most recent threat, North Korea said the United States faces an “abyss of doom.”

“The U.S. had better make a decisive choice … if it does not want a horrible nuclear disaster and tragic doom,” North Korean state media said on Nov. 8.

The USS Ronald Reagan, USS Nimitz, and USS Theodore Roosevelt took part in the military drills in the Western Pacific from Nov 11-14.

A spokesperson for the U.S. Pacific fleet said the strike groups can improve interoperability through such exercises.

“It’s intricate. Obviously, that is a lot of moving parts, a lot of ships. But you gain awareness of how to operate together when you have that many ships,” said Nicole Schwegman with U.S. Pacific Fleet Public Affairs Office.

The Navy’s official position is that the carriers were conducting the exercises primarily for the training value and to signal the U.S. commitment to the region.

“It is a rare opportunity to train with two aircraft carriers together, and even rarer to be able to train with three,” said U.S. Pacific Fleet Commander, Adm. Scott Swift in a statement.

“Multiple carrier strike force operations are very complex,” he said, adding that they spoke to the U.S. Pacific Fleet’s “ironclad commitment” to the security and stability of the region.

But the exercise also lends strength to the military posture adopted by President Donald Trump to push North Korean dictator Kim Jong Un to the bargaining table over ending his nuclear weapons program.

The Nimitz and its strike group are set to return to the U.S. at an undisclosed time, and the USS Roosevelt is set to take its place in the 5th Fleet where it was participating in Operation Inherent Resolve, combating ISIS in Iraq and Syria. In the meantime, both ships have paused in 7th Fleet and have joined its focus on the Korean Peninsula.

It is the first time the three aircraft carriers have operated together since 2007, when they drilled to be able to respond rapidly to any situation in the region.

The Asia Pacific has been a key focus for the Navy as tensions heat up on the Korean Peninsula and in the South China Sea. China has made expansive claims to the waters already claimed by several other nations, under established international law, as their exclusive economic zones.

The 7th Fleet has conducted ongoing military exercises in the region around the Korean Peninsula and the South China Sea, often in concert with local allies South Korea and Japan.

China recently called off a year of economic penalties targeting South Korea after the country agreed to not deploy any more anti-ballistic missile systems, not join the U.S. missile defense, and not sign a trilateral military alliance with Japan and the United States.

The U.S. has also conducted exercises with other regional allies.

North Korea’s state-run Rodong Sinmun newspaper denounced one such exercise in an editorial on Sunday.

It described a U.S., Australia, and South Korea trilateral exercise conducted off the coast of South Korea as  “as an unpardonable military conspiracy” conducted by South Korea’s “puppet forces.”

“It is clear what catastrophic phase such war games will bring,” it warned.

The exercises included the USS Chafee guided missile destroyer and ships from the Republic of Korea Navy and the Royal Australian Navy.

The three countries practiced maritime “interdiction operations” that aim to disrupt or destroy enemy supply lines and ships before they can do any harm.